Memories of Radio Listening Over 60 Years

Although I was interested in radio listening in the mid 1930’s, it was not until 1937 that I joined the N.Z. DX Club. The N.Z. DX Club was part of the Radio Record magazine, which was a private company. Editor Earl Reid realised that as well as publishing weekly programmes from the many B Class or private radio stations throughout New Zealand, there was an opening for radio listeners to contribute what they had been hearing. Those were the days of silent nights on some broadcast band frequencies and so there were a lot of North American signals being reported. This continued until 1939 and by that time the government had purchased all the private radio stations except two. And it also launched the NZ Listener, incorporating Radio Record. As The Listener was not interested in the DX Club, it eventually became a non-profit organisation, with Auckland and Southland being the main areas of the organisation.

The first magazine of the privately operated NZ DX Club was published in September 1939. It was called The NZ DXTRA and was published here in Invercargill. My first column appeared in that feature and since then has been carried in The DXTRA and the N.Z. DX Times over these past nearly 60 years. During the war years it was difficult to obtain paper but the Southland Branch of the DX Club was very active and we had up to 30 members attending meetings in the late 1940’s. In 1945 the DX Club President Ted Andrews and committee member Bill Masson from Auckland visited Invercargill to discuss the future of the club. It was obvious from discussions that the Auckland Branch, although being our Headquarters, were not radio listeners and in fact the National President did not even own a radio and they were more interested in running dances and getting in funds to keep the DX Club going. This continued and the position deteriorated, and in 1947 members of the Otago Branch of the DX Club and the Southland Branch joined for preliminary talks about a new DX organisation. This was eventually formed on August 15th 1948, when the NZ Radio DX League came into being. Since then it has promoted the hobby all these 50 years.

I should return to those years between 1939 and 1954 and the magazines and the various publications that I contributed to, including the Lamphouse Annual. This was a Cornish publication, published in Manners Street, Wellington. As well as giving details on the radios they sold, Hikers 1 and crystal sets and the like, there was an article on radio listening which I compiled and also a list of all the Australia and New Zealand broadcast stations, and shortwave stations that could be heard. In the early 1940s the interest in the Lamphouse Annual was such that it was decided to publish a monthly magazine called the Radiogramme. Here again I contributed a monthly column. The Radiogramme was the magazine of a radio hobbies club and each member was known as a Rahob and allocated a membership number. That continued in some sort of competition with the DX Club. Though of course being an annual publication and the magazine monthly, it didn’t focus on DX listening but more on radio theory, kitsets and the like. It continued until the early 1950’s when the Lamphouse Annual became a thing of the past. 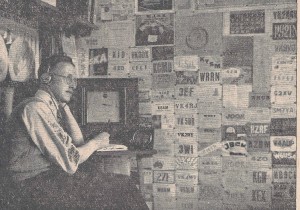 1936 photo of ATC from a newspaper article

In the early days, the Southland members generally journeyed to Riverton Rocks near Invercargill where Merv Branks had a crib or house, and using long aerials we heard some good North American signals. Members of the Otago Branch listened to out-of- town reception at Long Beach, which was also an excellent location for North American signals. Listening at home at 105 Princess Street Invercargill in the 1940’s, my logbook shows over 50 North Americans heard in a matter of 2-3 weeks and signals were excellent. 105 Princess Street, was in the southwest corner of the bluff and there was a house at the north west corner, so that I had a complete length of a city block for an aerial system. I used my English Echo purchased in 1939 for all this listening during the war years and up to 1954. The Otago and Southland Branches both began to increase in membership and in fact the Southland Branch annual meeting was always held in a hall as one could expect 30-35 members present. The strength of the branch was shown when we had a DX Convention in Dunedin, when there were cars leaving the city every 30 minutes to take over 30 members to this early convention of the DX League.

In 1950 the new editor of the NZ Listener decided that it would be good to run a shortwave feature and so I conducted a column for some 38 years. The column had the DX League logo on the top, and that brought in many requests from listeners for information on radio listening and we saw the League’s membership grow to well over 700.

Going back to the formation of the DX League, those in the original committees were: Administrative Committee – Jack Fox, Des Lynn, Peter Thorn, Ken Mackey & Jim Martin. The Invercargill Magazine Committee was made up of Merv Banks, Arthur Cushen, Alex Allen, Lloyd Warburton and Dudley Carter. The first National President was Lloyd Warburton and National Secretary was Des Lynn. In those days the publication was copied on a Gestetner Duplicator, but later the Wellington Branch with Bryan Clark and Tony King put forward the idea to become an offset publication and this of course is the style of the NZ DX Times we have today. 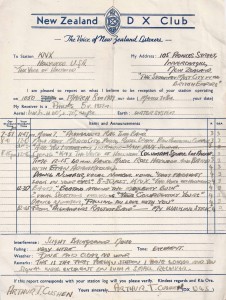 In the field of hobby promotion by radio, DX sessions commenced in the 1950’s, particularly over 4XD, Dunedin. Later with the advent of private commercial radio in New Zealand, there was a programme on Radio Pacific and another one on 2YB, Access Radio Wellington. Features on ZLXA Levin and Radio Rhema were being contributed to on a weekly basis. In the late 1950s, Cleve Costello had a programme called This Radio Age on Radio NZ’s Shortwave Service, and in 1960 he asked if I would contribute some DX material each month. Later Cleve gave up the session but it continued as a full 15 minute DX programme and in the 1970’s it was carried not only by our shortwave service but by National Radio on Sunday evenings at 10:30pm. In January 1966, I commenced my first programme on Radio Netherlands in DX Juke Box with Harry van Gelder. That continued until 1982 when Jonathon Marks took over the programme, and it became Media Network. My contributions were heard on the first or second Thursday of each month. There have been some memorable broadcasts on Radio Netherlands promoting all aspects of electronics and communication but they haven’t forgotten radio listening which is still paramount in the Third World. Locally I continued to write a column for the Southland Times newspaper called “It’s on the Beam” which started in 1957 and concluded after 39 years in 1996. Across the Tasman, I started writing a column in 1952 for Electronics Australia and it will celebrate 45 years with a special feature in the October 1997 edition of that publication. It has had several name changes in that period – it was Wireless Weekly, then it became Radio and Hobbies, then Radio, TV and Hobbies and now Electronics Australia. I also contributed to some of the more recent publications in North America, such as Monitoring Times, which has run several articles about my listening in the South Pacific, which has been of particular interest to North American radio listeners.

The following profile was scanned from the March 1952 DX Times:

ARTHUR T. CUSHEN, 212 Earn Street, Invercargill, is filling his second yearly term as president of the League and is short-wave editor of “The Times”. He was originally assistant S.W. editor of “The New Zealand DX-tra” and graduated to S.W. editor being associated with “The DX-tra” from 1939 to 1947, filled a similar position with “DX Bulletin (N.Z.)” for a year and has guided the S.W. section of “The Times” since its inception. He is a member of many of the leading DX  organizations of the world and his monthly loggings and notes are published in the DX publications of six countries and also broadcast regularly over various DX sessions. Arthur.began Dxing in 1957 and has 884 verifications on broadcast and 1582 on short-wave. His first verification was 3ZR Greymouth,
an object lesson to young DXers is the fact that Arthur DXed for Yanks for 8 months before he was successful in hearing his first, KNX…he now has more than 563. Best catches are (b.c.) “Voice of the 8th army” Italy 50w, Forces Station B4, Bari, Italy, 3kw; XOPB Hankow 100w, VUS Shillong, India 50w (s.w.) Danish Brigade, Germany, 400w, Bucharest, 75w, CKFX Vancouver 10w, and XRAY China 400w. A 7-tube Ecco has been used since 1940 and in 1950 he added an 11-tube communications receiver designed and built by Bill Marsh. In his city location he has a series of beveridge antennae strung over neighbours yards. Each week Arthur sends a cable (collect) to the BBC on the strength of their several signals and is in constant touch with the Engineering and Information Dept of the BBC on matters of frequency and schedule transmitter changes. He has taken a prominent part in monitoring prisoner-of-war messages and listening to enemy broadcasts for the Security Department of the N.Z. Government. He just recently won the World Listening Contest conducted by the World Radio Handbook and International SW League. Born in 1920 Arthur was married in 1946, he is 5ft 7in high, weighs 140lbs, blue eyes and wears glasses having undergone severe eye operations. He is staff manager of Abraham Wachner, a large boot emporium. He confesses DXing is his only hobby  besides gardening(?). We contribute Arthur’s success to enthusiasm. 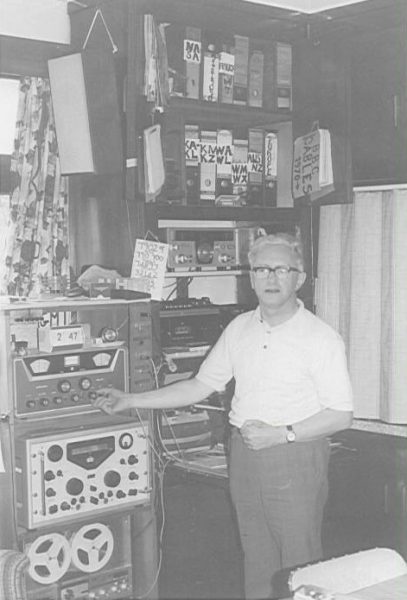 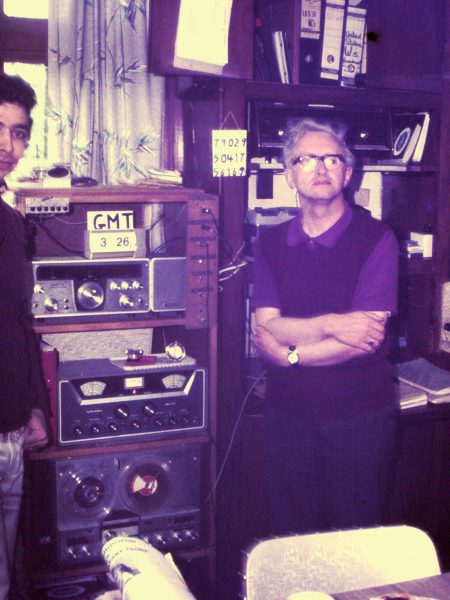