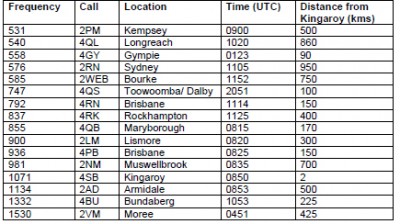 John and Jeanne Bastable kindly welcomed 9 visitors to Belvedere, their home
in Kingaroy (Queensland, Australia), for a DX weekend. This is fast becoming something of a Queensland DXing mecca. From New Zealand Steven and Jeannette Greenyer and Stu Forsyth came, while Ray and Raewyn Crawford, John and Colleen Smith and Ron and Hazel Everingham came up from Brisbane. Local identity Geoff Hosking completed the party.

Two permanent EWEs (NE and SW) had previously been erected. A couple of
longwires were run out to offer a comparison with the performance of the EWEs. It became readily apparent that they were not superior in what they offered and were taken down for the last night’s listening. In addition another EWE was installed facing NW in an attempt to see what could be heard from the Asian region. This proved to be a bonus as a number of interesting stations were received, the highlight of which being Kenya on 1386 at 2100UTC, a good hour after sunrise.

A wide range of receivers were used including: AOR 7030, AORO 7030 plus, Drake SPR4, R8A, SW8, Icom R 75, Sangean ATS909s. All performed well on the EWEs. Ron Everingham began making crystal sets as a boy. 50 plus years later he is still doing so and another highlight of the weekend was seeing his crystal set in action. This beautifully crafted receiver is a double tuned crystal set with an in-line wavetrap, connected to 100m of wire. Its performance was outstanding, as can be seen from the table.

Geoff took the Greenyers and Crawfords flying in his plane around the power
station, coalfields and farms of the South Burnett area. Some excellent photos were taken and the only worrying moment may have been when Ray took control of the wheel! Saturday lunch was taken at ‘The Captain’s Paddock’, a winery neighbouring Belvedere. John Wright where were you? We travelled by bus and the wheels of the bus went round and round…. It was an excellent meal enjoyed by all and the tuning oil aided afternoon reception! Sunday morning there was a wine and cheese tasting expedition in Kingaroy, peanuts were also purchased. John cooked a wonderful barbecue lunch. The Smiths departed late in the afternoon and took the good signals with them. There was a noticeable decline in reception patterns and little was heard that night. The group had to
resort to entertaining itself, and anyone else who cared to ring up. Monday morning reception wasn’t flash either, although different things were heard. Kenya was there again as was Saudi Arabia on 1440. DXAB was heard opening on 1296 and China was going well on 1035. Radio Tarana in Auckland was heard well past 9am NZT. It had been daylight in Australia for some time. It was also interesting to note that Kenya, also on 1386, was in the clear on the 300 degree EWE, while Tarana was in the clear on the 120 degree EWE. The temporary EWEs were soon dismantled and then it was time to go. Conviviality was the theme of the weekend and a good time was certainly had by all. Our sincere
thanks go to John and Jeanne for their great kindness. The DX wasn’t bad either. 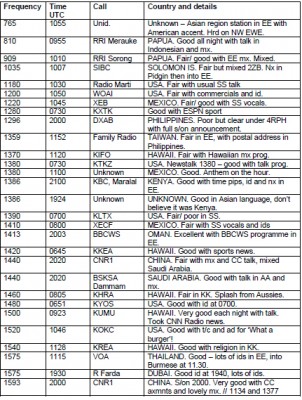