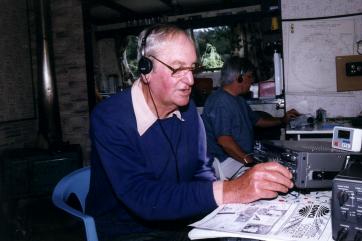 WITH REGRET we report the death of BASIL JAMIESON, a long time member of the League and the North Otago Branch, on 7 July at the age of 88. Peter Grenfell writes “Basil had lived in Kakanui (iust south of Oamaru) for about 36 years.

He had a lifelong career in education, except tor Army service overseas in Egypt, Italy and then with J Force in the occupation of Japan.

He was one of the early members of the Citizens Band Radio Club and then became a member of the League’s North Otago Branch where he held various positions. With his educational background, knowledge and wisdom, Basil was a valued member who was always willing to help new and younger members learn about the complexities of the hobby of Radio DXing.

He will be missed by his many friends and neighbours but his memory will live on for all those who knew and respected him for his strength of character and integrity.”

And from Arthur de Maine; “I first met Basil in I983/84 when I ventured south to the AGM at Oamaru and Peter Grenfell took me out to Kakanui to visit Basil. When we moved to Kakanui in 2002 I found that we were only two streets away from Basil. I would often walk around to his place to find that he was not home but away driving around North Otago or further afield.

Then in later years I found out about his time in the Middle East during World War II and also his time in Japan with the New Zealanders stationed there during the occupation. A book has iust been published called “Occupation” about the New Zealanders in Japan and a number of photos from Basil are reproduced in that book. I shall miss our little chats about the happenings around North Otago”. (via PETER GRENFELL & ARTHUR DE MAINE)