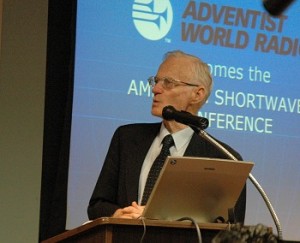 “I was born at Victor Harbour in South Australia, and grew up in Charleston, where my father had established a motor business just before World War 2. My Uncle Max Mudie, who lived near Victor Harbour, introduced me to the wonderful world of international radio. He used to build his own radio receivers, so I learned to do this also. Many of my earlier QSLs, Australian & overseas, were logged on these (uncalibrated!) home made radio receivers, using generally
the old English Cossor valves.

During the early part of the Pacific war, I was invited to monitor broadcasts from the Japanese shortwave stations in Asia in the same way as Arthur Cushen. His name was mentioned to me, and the authorities indicated to my father that I would be given a suitable radio receiver. However, I was a little younger than Arthur, I was still attending high school, and I was a little afraid of listening to broadcasts from what were at the time enemy radio stations. So I hesitated to accept!

Other South Australian radio enthusiasts in those early days included Rex Gillett (with whom I still exchange letters), Ted Fluck and Wally Young. Ern Suffolk was my mentor at the time, and he lived near Lobethal, just a bicycle ride away from where we lived.

I studied theology at a college near Newcastle in NSW, where I met my wife. We served in South Australia, Tasmania and Western Australia before accepting a transfer to the countries of Southern Asia in the interests of radio ministry. In Sri Lanka, I became acquainted with the well-known Victor Goonetilleke, and the Sri Lanka Broadcasting Corporation invited me to begin a DX program, the old Radio Monitors International.

After nearly 20 years service in the dozen countries in Southern Asia, we were invited to transfer to the United States, where I am involved in many areas of AWR activity, including the AWR Board and other AWR Committees, and the DX program Wavescan. I have two academic degrees in theology and two in international radio communications. My doctoral dissertation was on the history of Radio Australia.

Over the years, I have accumulated a collection of more than 30,000 QSLs (I am in the process of counting them and entering them into a computer file, and this will take a year or two to complete). It is probable that I have visited more radio stations in more countries of the world than any other person, and I lay claim to being the only person in the world who has jogged the entire coastline of Goa, in India!”