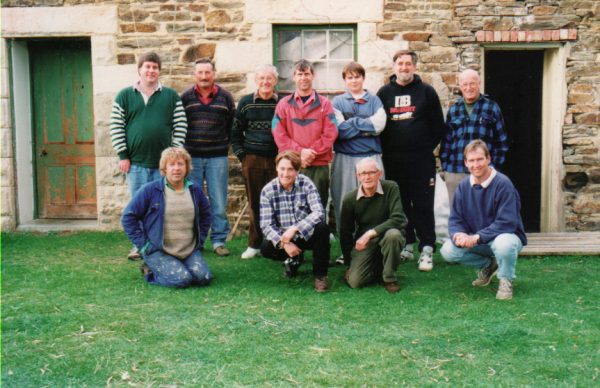 Ron, back row, last on right at an NZDXRA Shag Valley Easter weekend get together.

It is with great sadness that we learned of the recent passing of Christchurch member Ron Killick. He was the King of Utilities with 61,957 veries from 133 countries. Ron was a stalwart of the RA and towards the end of its existence he edited the RA magazine Tune In. He was also a founder member of the Aviation Historical Society of New Zealand and had membership number 7. He provided the international movements section for many years and these records are an enduring historical record of a bygone era. The above information comes from a blog and to read more of Ron’s exploits in this area, go to:
http://nzcivair.blogspot.my/2016/01/vale-ron-killick_26.html

A number of members have spoken about Ron and their comments are reproduced below. 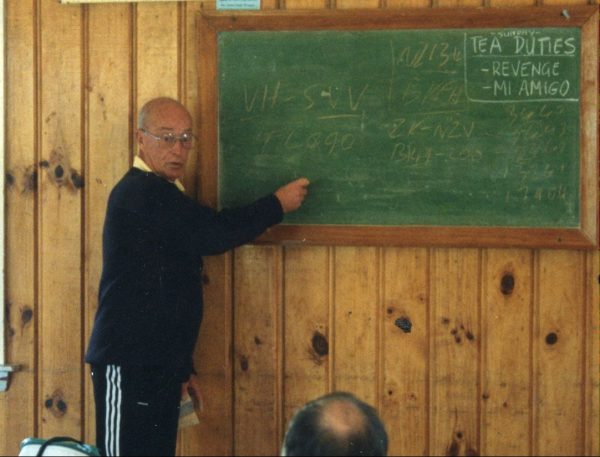 I first met Ron way back in the late 50s, when he showed me some of the “tricks” to aviation DX. Ron back then was in the RNZAF as a communications officer. Over the years he came and went from ChCh, being based more in Wellington, at HQ in Stout Street. He also served time in Fiji, Lauthala Bay, where there was a Sunderland Flying Boat Base, and in Singapore. I can’t remember when he left the AF, but when he did he returned to ChCh, and took a job at the airport, firstly as a toll plaza operator, and later as one of the Security Officers. For many, many years Ron was the Ham/Utility Editor for Tune In, the RA magazine, later
taking on in steps the whole editorship of Tune In as numbers of members faded away. Eventually the two clubs merged, at which time Ron stepped aside from any positions of responsibility. His knowledge of DX-ing in many ways exceeded that of Arthur Cushen as Ron covered all aspects of the hobby, not just SW and BC, and he always gave freely of his knowledge.
-Douglas Johns, Christchurch (currently in Oslo!)

Ron was truly an integral part of the NZRA executive. My first meeting with Ron was shortly after joining NZDXRA in 1964. He was always very practical and shared his knowledge of Utilities. His excellent cooking skills at AGMs will always be remember along with his other fine attributes.
Arthur DeMaine, Utlities Editor, Ashburton

Ron will be known for holding the RA together in its twilight years, for his extensive collection of civil aviation materials including many thousands of QSL cards, and his links back to the golden days of MW/SW DX in NZ. I met with Ron quite a few times, he came out to North Beach to see us several times too…in later years he remained a friend of the NZRDXL.
David Ricquish, former Chief Editor, NZDXT, Wellington

Very sorry to hear about Ron though I knew he’d been ill for some time. Ron and Wally Singleton were the glue that held the RA together. Well remember meeting them both at Shag Valley DXpeds on several occasions. Ron was very likeable and interesting to talk to. I met him at Chch airport where he was working one day and he insisted in taking Linda and I to the staff cafeteria for a cuppa. Ron’s home at 67 Dunbars Rd is a famous place-name in NZ DX history.
Paul Ormandy, Life Member, Oamaru

Yes, another stalwart gone. I joined the RA in the late 60s while still at school, RA3190, and Ron and Wally were in their heyday. Another great contribution to the hobby. Thanks Ron.
Mike Smith, Taranaki

I first met Ron when I returned to Darfield from Wellington in about 2003. I set up a branch gathering and Ron turned up in the company of Douglas Johns. They inspected my EWE antennae in the back garden and I think Ron was a little bemused by them. I had no idea who Ron was at the time, but the extent of his knowledge soon became evident. I met Ron several times over the years I was still in New Zealand, at branch gatherings and indeed 67 Dunbars Road hosted one or two. Going there was an eye opener. The veries and memorabilia were quite something. I always found Ron to be supportive and helpful. When I was editing the Ladders section after I had moved abroad, Ron would always send
me a friendly message with his contribution. I knew he had not been well, and was greatly saddened to elarn of his passing.
Stu Forsyth, Chief Editor, Cyberjaya, Malaysia.