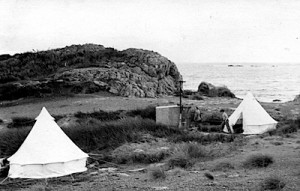 Taken from the pages of the February 1954 DX Times:

When the Maoris used to hold their hangis and perform their war dances at Ngapohatu 100 years ago they didn’t pause to think whether the hideous* noises would still rent the air 100 years on. They now have their successors. Eleven warriors if the Southland Branch of the NZRDXL invaded the Rocks on the week-end beginning 19, and as a result 114 reports should help to increase Post Office revenue. Alan Fraser with 37 headed the score board followed by Des Frampton 29. Alex Allan  24, Arthur Cushen 14, Merv Branks 13, Bill Milne 12, Noel Parry 9, Keith Robinson 5 and Bill Marsh (late arrival) 1. Stations in all continents were heard on a battery of two Marsh Special Communications, an Eddystone, a Hallicrafters, and a battery-operated Gulbranson. The highlight of the week-end was probably in the early hours of Sunday morning when some of the diehards on their second night without sleep had just finished with KIKI KILA KGU KHON KANI and tried fruitlessly to drag in a weak Alaskan, heard KUAM (620) Guam on a test at 5.a.m. The remainder of the camp was rudely awakened and arose (with the exception of Keith Robinson who resolutely affirmed that once he went to bed he was there to sleep). WBOY in Florida was an unexpected test and KEAR was also on test but F/c were scarce and only KWRL logged. KBOL (1490) at 8:30 Friday was an interesting logging but the only other 250 Watters logged were KEYY KYOR KORE and KICO. A mixed bag included KUAM YVMR Tunis 2AP 3-FEN 2-NHK JONR 2-AIR and 2NM, also about 10 Europeans. Apart from four Canadians (CJOC CJOR CKXL CKWX) the remainder were Yanks.

(*The Editor appreciates that use of the word ‘hideous’ may be culturally unacceptable to some readers in modern New Zealand. This web-site does not promote or accept insulting or derogatory language. However, the word ‘hideous’ is included for reasons of historical accuracy as this was the word used by Merv Branks in his article.) 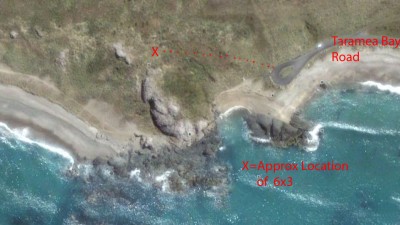 Ed’s note: Ngapohatu is likely a name Merv contrived from the Maori phrase for “The Rocks”. The official Maori place names were kindly provided by the local  Oraka Aparima Iwi on enquiry from Bill Marsh. (See text below).

On the Coloured Photo

On the Black and White Photo