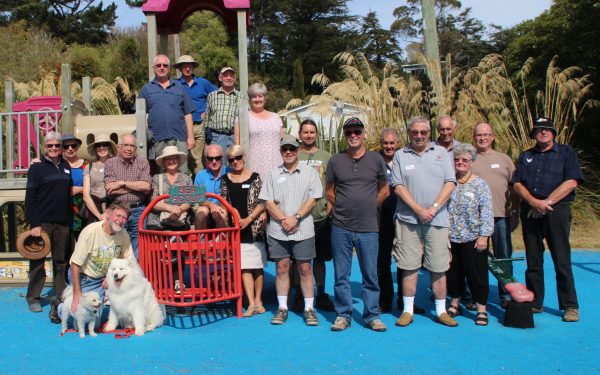 Convention 2016
Moeraki
CONVENTION 2016 REPORT
Another highly successful gathering is over and the consensus of those attending is that the DX League is in good heart, the ‘NZ DX Times’ continues to be valued by members, and there is still some great DX to be heard. BILL MARSH, attending his first club event after an absence of 40 years, said it was as if he’d never been away from the club – the same great connections and comradeship to be had. Members from Australia. North Auckland, Hamilton, Kapiti, Wairarapa, Blenheim, Christchurch, Ashburton, Timaru, Oamaru, Dunedin and Southland attended, an estimated 12% of current club membership, along with 6 wives
who joined in proceedings and were rewarded with French Cookbooks donated by RFI.

The convention was held from 18 to 21 March at Moeraki, a small fishing village 70km north of Dunedin and the main listening and dining venue was an outstanding clifftop home overlooking the Pacific Ocean. The weather was exceptional – fine, warm and calm over the 4 days. As is so often the case nowadays, local noise was a problem for serious DX but keen antenna experts PAUL ORMANDY, ANDY GARDNER, STEVEN GREENYER and PETER MOTT, supported by JON WOOD, IAN WELLS and PHIL GARDEN, were able to erect and modify a variety of antennas throughout the weekend to improve reception and minimise the interference levels. Peter’s Delta antenna seemed to attract the weakest signals, and it was generally agreed that the antenna is the most important part of any DXer/SWL setup.

Antenna workshops were led by Peter on Flag and Delta antennas, Paul on Coaxial Loops, and TONY KING demonstrating the Ferrite Sleeve Loop.

It was great to hear USA and Puerto Rico X-Band stations on a loop antenna and the 70+ year old Marsh Special receiver developed by Bill’s father for League members in the early 1950s. Optimised for medium wave and utilising a lot of components from war surplus ZC1 receivers, 17 were built between 1951 and 1955. BRYAN CLARK introduced members to Software Defined Radios and a pair of WinRadio G33DDC Excalibur Pro’s were put through their paces. In the ensuing discussion, almost all participating felt that only loggings made on NZ-based SDRs should be included in the DX Times Bandwatch and Broadcast trails.
A number of shortwave hobby ‘pirates’ scheduled broadcasts to coincide with the Convention, the most outstanding being X-FM Shortwave from USA on 6875 and Mikes Radio from the Netherlands on 6950. Channel Z from the US east coast ran a series of test transmissions over 3 days with a 16 watt homemade LU8EHA variant transmitter on 11428.3 and 11640.7 kiloHerz. Some brief audio snatches were caught on the first day and the carrier trace was confirmed on SDR spectrum displays. The operator “Z” considered the tests a success as
he has previously only been heard as far as Japan. On Sunday night and Monday morning stations were also logged on 9300 (FRS Holland), 6295 (Reflections Europe from Ireland) 6304.75 (tentatively Wonderful Radio London) and 7610 (Radio Latino Italy).

The local noise problems meant limited medium wave DX but Radio Marti from Florida was a standout, being audible on 1180 as early as 0530 UTC. Peruvians made an appearance together with a few of the more regular Yanks.
Investigations were also set in train for a venue for the League’s 70th Anniversary Convention, due in 2018.

All in all, another great gathering of members – it was wonderful to see or hear:
** NEIL McDONALD logging his first North American MW stations and recalling his work on ionospheric research at Campbell Island in the late 1950s;
** BILL MARSH recalling his father’s reception in Invercargill of 10 South African medium wave frequencies between 1948 and the early 1950s, on a 450 foot longwire to the southeast;
** RAY BABBAGE confirming Radio Trackside to be his favourite DX;
** SUTTON BURTENSHAW once again prioritising a DX League Convention ahead of a competing Jazz Music Festival;
** The usual convention banter and quips from PAUL ARONSEN;
** IAN WELLS and JON WOOD at their radio dials while all others slept;
** The dramatic Moeraki sunrises seen by our early risers. **
Our thanks go to the 2016 organising committee of PAUL ORMANDY, PAUL ARONSEN, ARTHUR DE MAINE and STEVEN GREENYER. Thanks also to Radio NZ International and Radio France International for their sponsorship.

Musings from the Organiser – Paul Ormandy
At Moeraki, we discussed the future of the League and of the hobby. It was unanimously agreed that the NZRDXL is here to stay. The general decline in opportunities for traditional SWL/SW DXing has continued since a similar discussion at Mangawhai in 2013.

The major contributing factor is the disappearance of more and more international broadcasters from shortwave. Whilst this decline creates
opportunities to hear rarer domestic DX usually buried by the international set, there has been a similar decline in the number of domestic SW broadcasters too. In Europe even the MW band is emptying out with stations moving to DAB broadcasting in the VHF range whilst insome parts of the world FM has been slated to go as well.

There has also been growing disinterest in DX hobbyists amongst shortwave broadcasters, probably largely forced by shrinking budgets. There are few if any DX programs run by the stations themselves however some do carry the likes of Glenn Hauser’s broadcasts. Budget constraints are also likely to blame for the very poor QSL return rate these days.

We solicited donations for the convention auction from all major international broadcasters, only two sent items. Our very own RNZI contributed some very attractive T-shirts and RFI some listener’s cookbooks. We also asked for donations of radios etc from most of the current SW radio manufacturers (Tecsun, C Crane, Sangean, Eton/Grundig etc) only C Crane even replied, saying they were sorry they couldn’t send anything. The WRTH was asked if they would consider donating a 2016 WRTH, again no reply.

Whilst there are plenty of light-weight portable receivers around, there is also a dearth in new communications receivers to replace the aging sets we use now, e.g. IC-R71, IC-R75, AOR-7030+, R-5000s etc. SDRs seem to be the only way forward, or buying a ham rig with full broadcast coverage. The latter causes an issue in that you must have a ham license to own one, unless the transmitter has been properly disabled.

The other indicator of broadcasters losing interest in SW is when the programming is no more than the relay of a domestic station, with little or any content prepared for an international audience.

One of the highlight of past conventions has been the auction. It was no exception at Moeraki with donations of “treasure”; including radios, loops, preamps, pennants, QSLs, cables, tape recorders, books and more netting approximately $670. This included two radios donated to the League by the estate of the late Ron Killick. There are more of Ron’s radios to be auctioned on TradeMe and it was unanimously agreed on Andy Gardner’s suggestion that
the funds from the sale of these radios should be used to create a “Ron Killick Memorial SDR Project”. More on SDR below. Many thanks to all those who donated items.

We were fortunate enough to have 3 members present at the convention who have experience with SDRs (software defined receivers). Bryan Clark, Peter Mott and Andy Gardner have been using them to good effect. An SDR is a little box that you connect your aerial and computer to. Instead of a conventional radio dial, the computer monitor becomes the dial. There were two Winradio units operating throughout the convention and they were very impressive.

One of the main problems for DXers in New Zealand these days, is the level of electrical interference that pervades the band with many DXers simply choosing not to listen because of the all-intrusive noise. One way around this is to locate an SDR in an electrically quiet  area with a good antenna attached, then access the SDR from your home computer over the internet. The suggestion that the League buy an SDR for remoting was first mentioned at Mangawhai in 2013. Since then, technology has evolved and much more is realised about their potential. Some internet-linked SDRs allow up to 4 users at one time. There are many free SDRs around the globe if you wish to try one, websdr.org is one example.There are certain requirements that would have to be met for this project to be beneficial to NZRDXL members, i.e.

If you have a site that fits the above requirements and would be keen to provide NZRDXL members with an opportunity for noise-free listening, please contact Bryan Clark.

The 2016 Moeraki Convention finished in the black. Excess funds from the auction and convention will be returned to the League. The next Convention (as mentioned by Bryan above) will be in 2018 when we will celebrate the NZRDXL’s 70th anniversary. 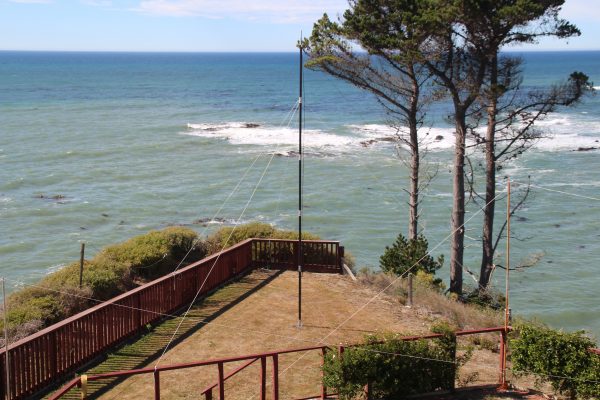 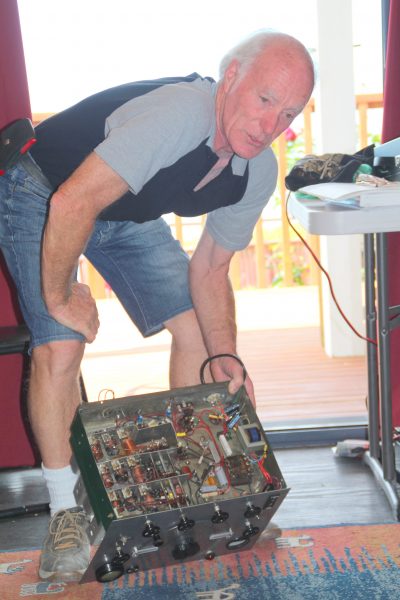 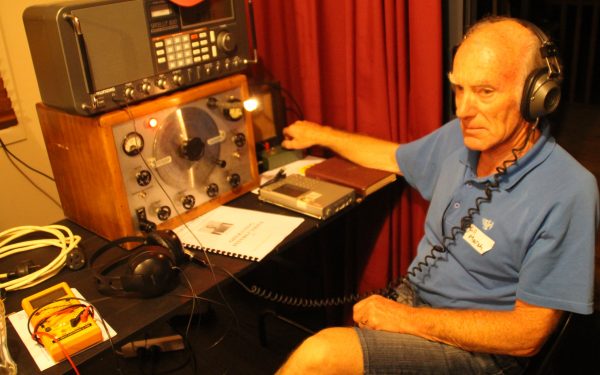 Bill Marsh listening to Yanks on the Marsh Special 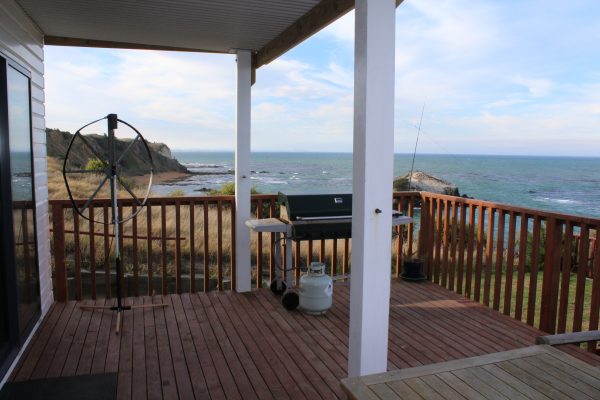 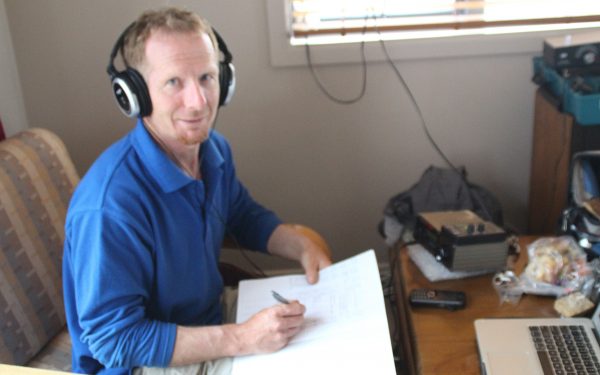 Jon Wood on his Lowe attached to a inverted Vee antenna fed with twisted line. 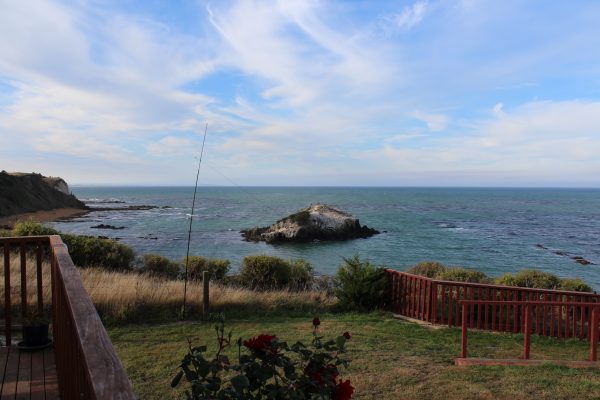 The view out to North America 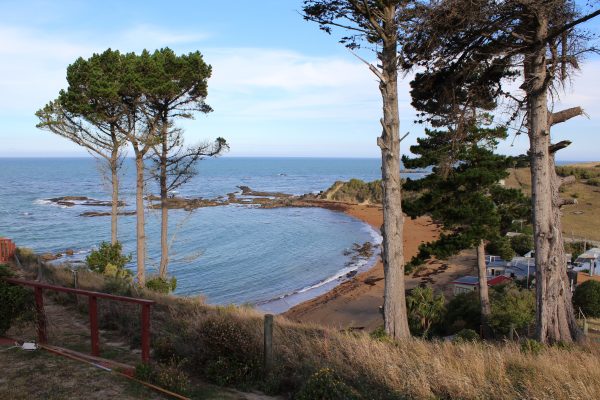 The view to Chile 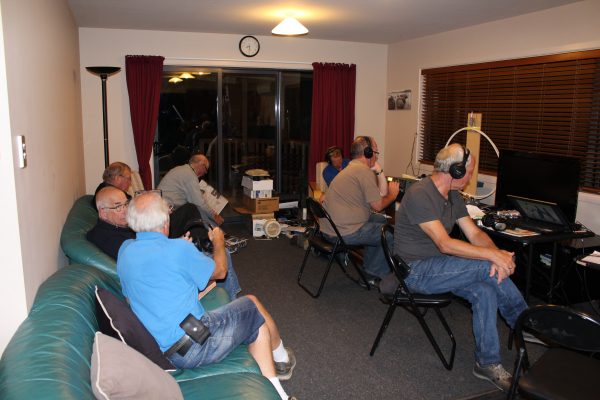 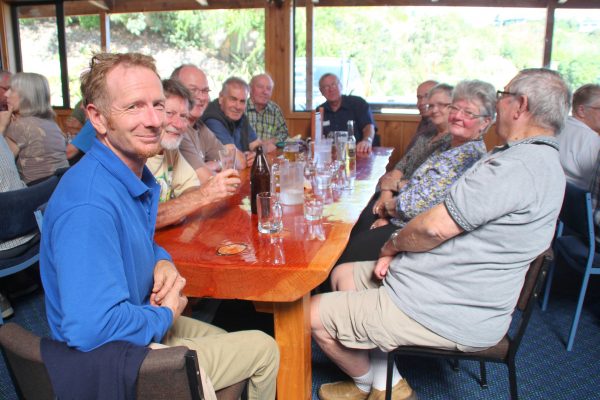 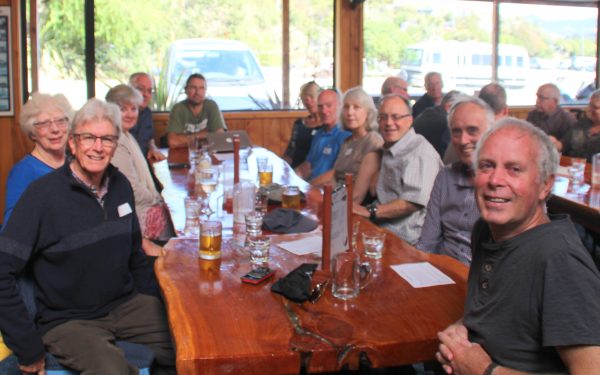 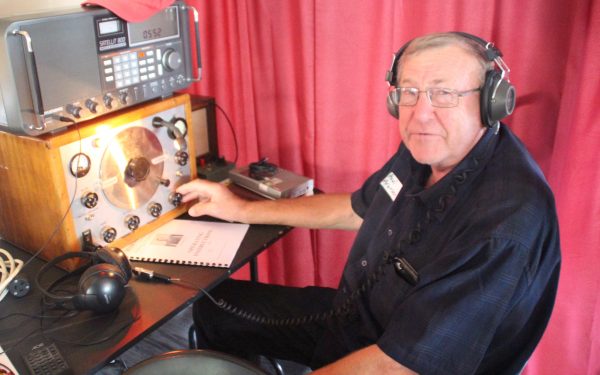 Paul A and the Marsh Special 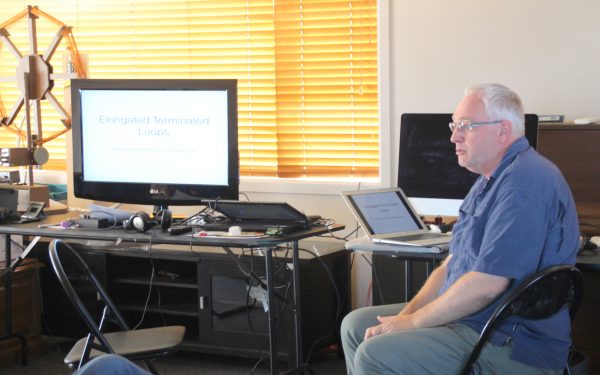 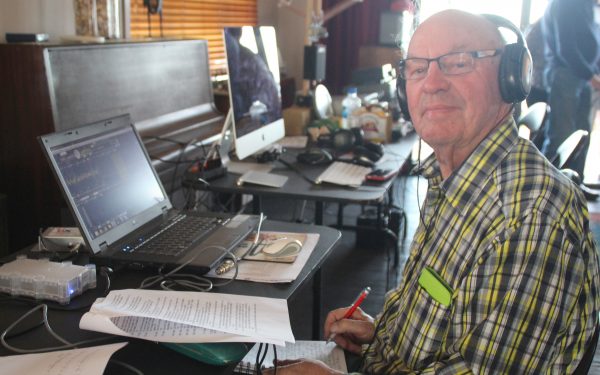 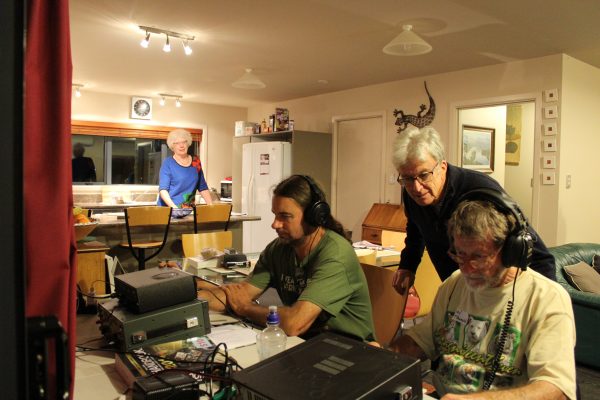 Sandra watching on as Andy, Bryan and Neil listen. 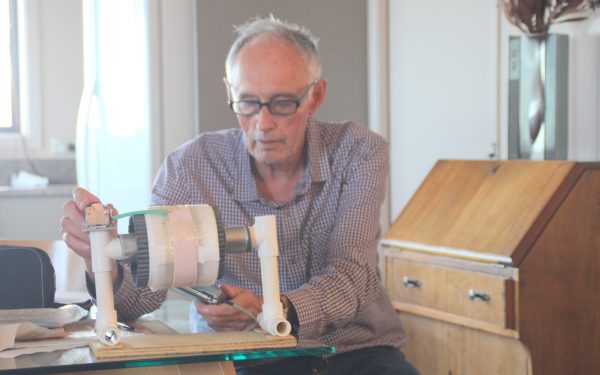