This article appears with kind permission of the author, Jack Fox

The Netherlands Indies Broadcasting Company Ltd. This interesting history on the formation of radio broadcasting in the Netherlands East Indies was contained in a booklet published by the Dutch in 1939 and included with pre-war verifications for DX reports.
This reprinted article has been prepared by JACK FOX, Patron of the  New Zealand Radio DX League, in 2003 from material he received in 1940.

The Nirom began broadcasting in the Netherlands Indies on March 31st 1934. Until some local stations had been in operating in the bigger cities, the cost being defrayed by contributions paid by the members of the local radio societies. These societies still exist (1939).
The Nirom started originally with four stations in less than 18 months, however, 20 stations were operating, and at the beginning of 1939 the number of transmitters amounted to 27, namely five high power archipelago and 14 local transmitters for western and one archipelago and 7 local transmitters for oriental programs will be augmented to three. The 19 transmitters which broadcast the program for Europeans get their modulation from the Batavia key station by means of telephone line their total length being 800 miles or 1270 kilometers.
The stations at Soerabaya, Bandoeng and Semarang also have full studio equipment; when important events, taking place inany of these towns, or when special items, which can emanate only from these points, are transmitted, all stations can be switched over to one of these studios. For instance, Batavia broadcasts from 1800 till 2000. For instance, Batavia broadcasts from 1800 till 2000. From 2000 till 2030 Bandoeng is key station, whilst from 2030 till 2230 Soerabaya, with a special feature, operates as key station. This operation takes only a few seconds and is effected imperceptibly to the listeners. 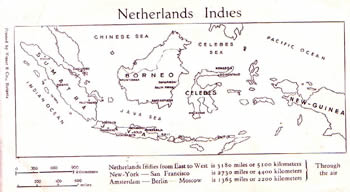 The 8 transmitters which have to broadcast the oriental programs are divided into two sections. Soerabaya gives modulation to 5 stations. Batavia or Bandoeng provides the remaining three. Both sections can be coupled together by means of 230 miles or 600 kilometers of telephone line to give certain important programs to all transmitters. The total length of telephone lines these two circuits amounts to 390 miles or 400 kilometers. If wanted both oriental networks can be coupled to the western network. In this case the key station delivers modulation to 27 transmitters over a telephone line network of which the total length amounts to 1420 miles or 2270 kilometers.
Owing to unfavourable atmosherical conditions existing in the tropics, no wavelength above 200 meters (1500 kc) can be used. The long distance stations use wavelengths below 100 meters (3000 kc), regional and local stations between 100 – 200 meters (3000 – 5000 kc).The Nirom guarantees to broadcast a program of sufficient audibility to be heard throughout the Netherland Indies. The most powerful transmitter is the Batavia archipelago transmitter but is has, owing to its wave lengths, not the longest range. PMN and YDC are directed NW to Sumatra and Borneo; PLP and YDB are directed NE to Borneo and Celebes. All other stations use a non-directional antenna. Great technical difficulties have been surmounted in order to carry the Nirom programs all over the vast area of the Netherlands Indies, which is about the same as that of the United States of America. 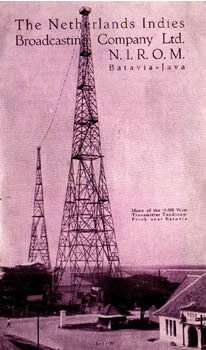 The area of all Islands, not including the intervening seas, equals that of England, France, Germany, Italy, Holland, Belguim, Denmark, Portugal and Switzerland.
The area where audibility has been proved to be good, were declared, Nirom Territory by the Government, and listeners in these ares have to subscribe accordingly. October 1st 1936 the whole of Netherlands Indies were within Nirom Territory.
Whenever big features are broadcast in Holland or other European countries, for instance international matches, these items are broadcast by the wellknown Dutch round-the-world station Phohi or by the Government transmitter at Kootwijk (Holland).
The Nirom then operates a modern receiving station near Bata via and relays the European program to all its transmitters. Listeners pay to the Nirom a fixed amount per month. This subscription, payable at the local Post Office, is an adjustable one, and decreases as the number of listeners increases.April 1934 5000 listeners 3 guilders
Jan 1935 10,000 2 ½
Jan 1936 24,000 2
Jan 1937 40,000 1 ½
Jan 1938 53,000 1 ½
Jan 1939 70,000 1 ¼

The Nirom program is controlled by a committee of 14 members. They hold office for two years. Ten members are elected by registered listeners. Two are appointed by the Government, and the remaining two members, the general broadcasting manager of the Nirom and his assistant.