For me the convention started on Thursday evening when John Watson took
me and Leigh Morris out to Whangaparoa from Auckland, a journey which
took two hours in the evening rush hour and holiday traffic. At
Whangaparaoa I met for the first time the man Invercargill members always
talk about whenever you are in Invercargill. Ray Crawford from Queensland, Australia. Five of us stayed the first night. no DXing but quite alot of talking about the hobby and catching with different happenings both here in New Zealand and Australia. After that it was to bed where a number of mating calls were heard during the night.

On Saturday morning aerials were erected in all positions both long,
medium and short ones while we waited for everyone to arrive and for the
After lunch everybody met at the hall for the official welcome from the
Auckland Branch Chairman. John Watson and a few words from Bryan Clark
about the programme and Evan Hurray brought to our attention the House
rules. After that members had free time to catch up with old friends, make new friends. DX or just walk around etc.

The next day was to start at 0700 hours with a early morning run through
the park led by Barry Williams, needless to say I never made the start.
Breakfast was at 0800 hours followed by a demonstration of the LOWE HF
225 by the New Zealand Agent, Jim Smith of Wellington at 1030 hours.
After lunch a visit was made to NZ Telecoms Satellite receiving station near Warkworth. This visit was quite interesting but a little to technical for me. After this we then proceeded to Snells Beach to visit Des ‘Wright’s Vintage Communications receiver display.

Sunday started with those that wanted their early morning jog followed
by breakfast. This was followed by Peter Chamber’s Workshop on Medium
wave antennas. At 1000 hours a Discussion Panel discussed questions that
had been submitted by members previously. During this discussion one of
the School Reunion boys (Paul Aronsen) presented the results of the
survey. After lunch photos were taken outside the hall. This was followed
by the event everybody was waiting for— The Auction presided over by
schoolmaster Stuart Forsyth which raised four figures plus.

All too soon Monday arrived with the presentations and prizes and the
results of the poll which are mentioned further on in this report.

This Convention for me was one of talking and getting to know other members of the league and for finally meeting those members who were only names mentioned in the DX Times. Some of interesting things that occurred at Convention was the lady on the Saturday who asked why she did not get
breakfast in bed. The next morning a certain gentleman was seen rushing round like an Air New Zealand Stewart serving breakfast. The Convention as also a school reunion for three or four members from little known high school at the bottom of the South Island. Another feature was the fire fighting skills of two non union members with a fire hose through the men’s toilet window. The last evening featured the high stepping action of a certain overseas Chief Editor and the camel riding abilities of a certain person who will remain nameless. (the editor has been bagged) Certain members of the Aussie group took a liking to the “PURPLE DEATH“ with the result that it is now all exported to Australia. This
convention was certainly the chance for the younger DXer to use some of the bigger and better communications receivers at the Convention. This convention was certainly very friendly and I enjoyed the weekend. My thanks to the people that arranged the weekend and to Sandy and Bryan for looking after me before the convention. 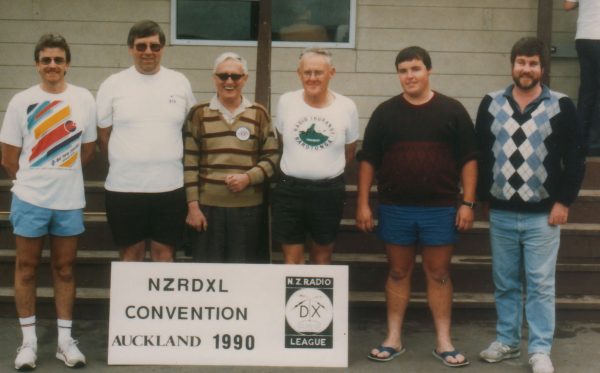 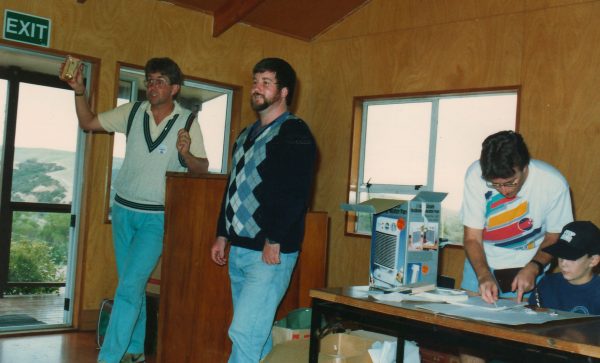 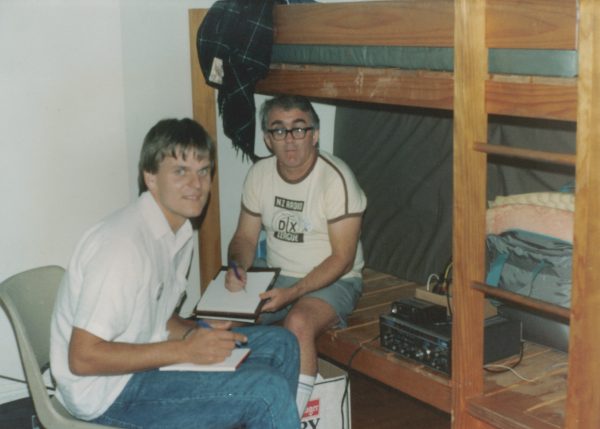 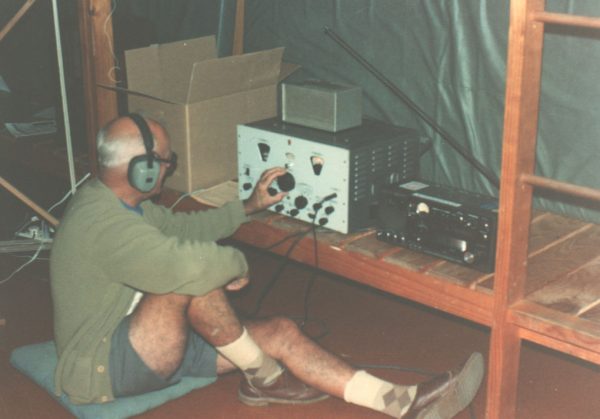 Bryan Marsh and one of his beloved boat anchor receivers. 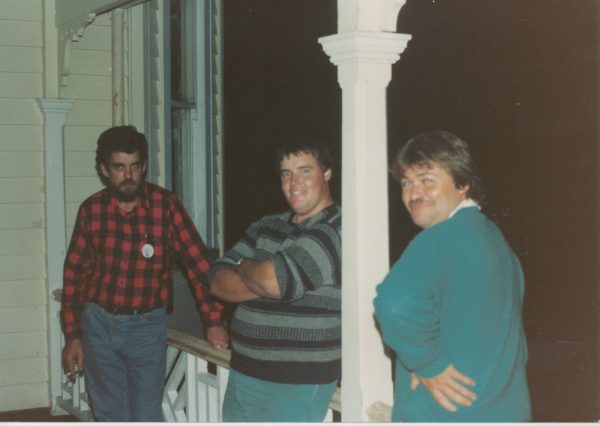 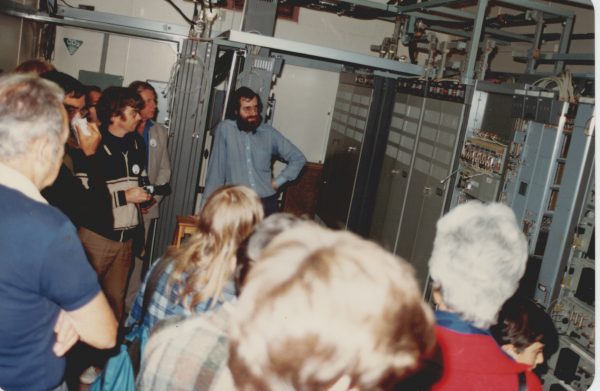 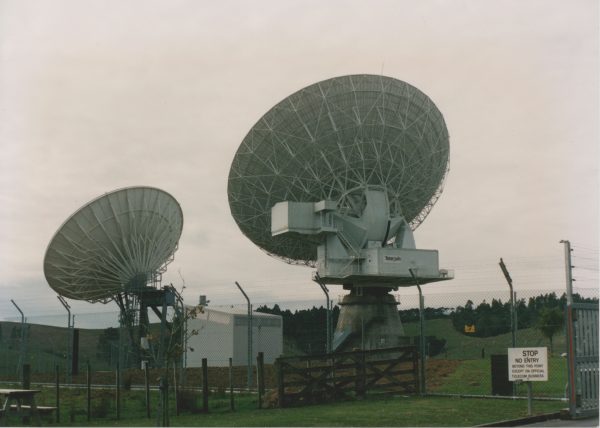 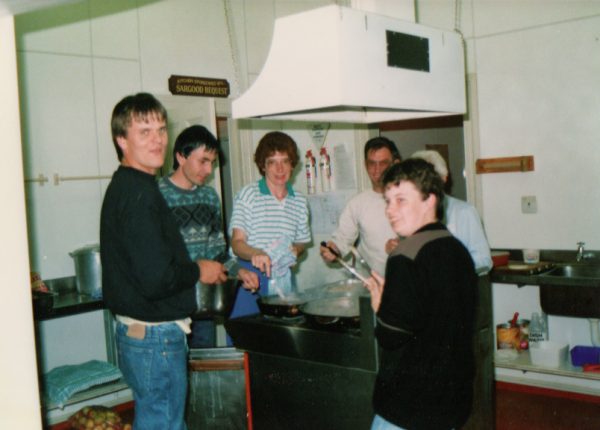 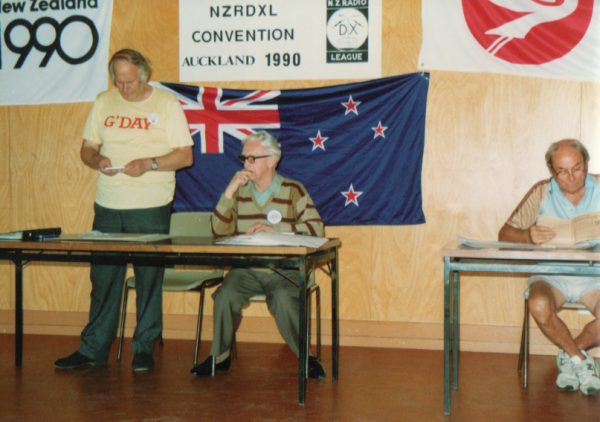