ITO TSUKIGAWA a respected member of the DX League passed away in Oamaru on 1st August 2008. Life member PETER GRENFELL writes “Ito was a colourful character in so many ways, his quiet little chuckle and his sense of humour, that little glint that came into his eyes when he was up to some mischievous behaviour. He came into our lives in so many ways because he had so many varied interests. Ito came from Balclutha to Oamaru to start up a printing business.He was very respected in the North Otago business community
and was a stalwart in the local Salvation Army Corps. His many interests included the Oamaru Rotary Club, Birthright, Crippled Children’s Society, North Otago Philatelic Club, North Otago Branch NZ Radio DX League. He was an avid reader and loved a good discussion on anything from local and national politics
to religion. He loved listening to the world through short wave radio and joined the DX League in September 1960. He took a very active part in the local branch of the League and for many years printed the DX League members stationery. He will be remembered for his humble, helpful and generous nature.” 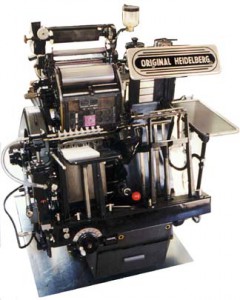 Through the eyes and ears of a twelve year old boy, the Heidelberg Windmill press was a fascinating, overwhelming contraption. It could hiss and thump, belch and grind, its cyborg face moving relentlessly in and out as it toiled its way through an endless mountain of print jobs. The paper was relentlessly and speedily forced onto the lead type as the Master (Ito) moved swiftly, checking ink and platen, paper and impression quality. The two seemed in communion somehow – it responded to his every movement.

Long afternoons spent at Comet Print resonated with the sound of moving gears grinding and pulsing, and vacuum suckers hissing and spluttering. The rhythmic yet contrapuntal sounds harked danger, and seemed to remind all who came close to remain vigilant, else find themselves pulled swiftly into the machine. There appeared to be great danger of injury, or worse, being indelibly marked with the same dense black ink that seemed to have run, like molasses, into every grain and crack in the old wooden floor boards.

Suddenly, without warning, the impression lever would be disengaged and the machinations would jump to a halt. The large flywheel remained spinning in near silence as a neat stack of freshly printed documents were carefully yet swiftly removed. The Master would call time for a cold dash through the autumn breeze to retrieve hot chips from Aspros. They were consumed hastily: the Heidelberg did not tolerate long breaks.

The brief silence would end as more paper was loaded, cylinder inked, and fresh type locked in place. The Little Giant was set in motion again, and it was time to leave for home. The sounds of industrial German letterpress echoed down the long corridor exit. Fainter now, it sounded like an ancient, everlasting whisper; “print i will, i never stop, feed me up, I must not stop”
WJS Grenfell 21 Feb 2011

DX Times Chief Editor MARK NICHOLLS reminisces “I first had dealings with Ito back in 1974 when I won a prize from 3NE 1566 for the ‘Best Reception Report’. The competition was organised by Ito and the North Otago Branch. In January 1978 I met Ito in Oamaru at his printing premises while in Oamaru for the National Scout Jamboree. PAUL ORMANDY visited me at the Jamboree site (Oamaru Racecourse) and took me to visit Ito and, after dinner at Paul parents place, to a North Otago Branch meeting – I still remember hearing my first North American MW stations on Paul’s car radio while we drove up the hill to the clubrooms.” On behalf of all League members we extend our sincere sympathy to the Tsukigawa family on their loss.

From Paul Ormandy: Ito was the first person to tell me that not only was there was a name for the distant radio-listening I was enjoying, there was a local club! I first met Ito in early 1974 when I went fishing with Ito’s son, Lindsay. We called into Comet Print on our return and I gazed in wonderment over the 40″ box loop Ito had connected to his valve radio! Ito explained the loop aerial, how it worked, showed me somet QSLs and invited me to the next North Otago Branch meeting.

Ito was a real gentleman, he had a love for radio as well as stamp-collecting and rugby. It was a real pleasure to call in to Comet Print and have a chat with Ito while he busied himself with his Heidelberg printing press. Peter Grenfell worked right through the wall, literally, so with me working in the building next door and Ted Sutton in the Post Office at the end of the block, we had ample opportunity to meet and we’d usually run into one another at Ito’s work. I have many fond memories of Ito so will miss him greatly. RIP old friend.