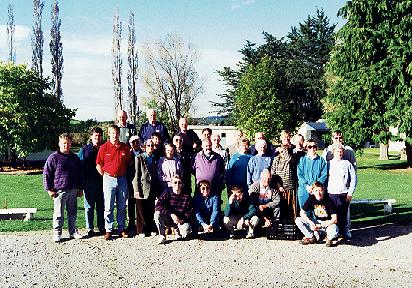 It was fine and sunny when we arrived in Oamaru just before lunch on Friday to met by Peter and Jill Grentell and Arthur Finch. Lorraine and I travelled with Peter out to Camp Iona, a drive of about twenty minutes south from Oamaru.

Camp Iona is situated a short drive, west of Herbert at the bottom of the foothills and is the most delightful spot. Upon arrival we found that several others had arrived and Paul Qrmandy was out in the trees somewhere erecting aerials. Not long after we arrived the peace was shattered, Paul Aronsen arrived from Invercargill (only talking about Paul, Gwen), Paul wasaccompanied by his wife Gwen and Arthur and Ralda Cushen. Soon afterwards several of the overseas people arrived. Don and Gwen Cook and Harry Weatherley from Melbourne arrived with Mark Nicholls and Peter McMillan from Adelaide arrived with Ron Killlick.

After greeting everybody the younger couples set up their rooms in the block opposite the sports hall not far from the main hall. The older couples and one or two others set up rooms in the Lodge and others as they arrived set up in various sleeping blocks around the camp.

The convention commenced at about 0300 UTC with a welcome from the North
Otago Branch of the League and afternoon tea. At 0400 UTC a workshop on practical beverage aerial construction and basic aerial theory was hosted by that ‘well known aerial erector, Paul Ormandy from Oamaru. Paul described how beverage aerials worked and answered a number of questions on different aerials. when the workshop finished it was of to set up receivers at the various listening posts around the camp. I set up my Drake SPR4 in the small room in the Sports hall along with Bryan Clark who also had a Drake SPR4 and Mark Nicholls who was driving the latest model Drake, the R8.

Reception was very patchy. After dinner everybody was placed in teams that were listed in the Convention program and a Quiz was run by Paul Ormandy
and Peter Grenfell.  I am not sure which team won but one of the highlights was your Chief Edit-or collapsing ungracefully to the floor when the legs on the plastic chair spread.

Saturday morning arrived cool but fine and started with a help yourself breakfast from 7am and after breakfast the Official opening was held with the official photograph of those present. After the photograph it was into the main hall to look over the display of equipment put on by Mainland Radio from Christchurch. On display were the A0R 3000, Kenwood R5000, Icom R—71A, AOR1500 , Yaesu R100, various aerials and books. All the members I think greatly appreciated the display as it gave those members from country areas or smaller town a chance to see first hand some of the new equipment available.

After morning tea a Discussion Group hosted by Harry Weatherley from DX Australia, discussed “DX and the Fax”. Discussion took place on faxed reception reports to radio stations, and whether or not this was what I call ethical.

The afternoon brought a trip to Weston for  a visit to Parkside Quarries the only Quarry producing Oamaru stone, then it was back to Parkside Garden Centre where we found a very nice Oamaru stone mail box, I thought it would be very nice at our home 1n Wellington, but upon inquiring as to the price I decided it would be left in Oamaru, (price $3400), then it was onto Peter and Jill Grenfell’s place for afternoon tea followed by a trip into Oamaru to visit some of the historic buildings. We arrived hack in Camp Iona in time for some early evening DXing following dinner. Saturday night saw David Yetman give a talk on his experilence on working for HCJB, in Ecuador, David also showed slides of the antenna sites owned by HCJB.

After David’s talk the first part of the auction was held with some slow bidding, some of the highlights were Paul Aronsen buying up radios and his wife Gwen asking, “why does he want more”, our National Treasurer, Bryan Clark had a field day when he discovered that wife Sandy was not in the hall, when Sandy made her appearance she was made aware of the goings on while she was not present. At the conclusion of the auction it was off to carry out some late night DXing.

Sunday morning saw another fine day and after breakfast saw a number of people head off to church while the rest of us attended a discussion group on FM DXing hosted by Bryan Clark. This group were treated to a very interesting talk given by Mike Foubisher from Mainland Radio on FM DXing and what to look for in long distance FM openings.

After morning tea another discussion group on Utility DXing was hosted by Ron Killick, Editor of ‘Tune ln’. This was another very interesting discussion in which I learnt more about the art of DXing aircraft etc.

At 1130am the 2nd part of Auction was held with T-shirts, stickers, posters and radio related books up for auction. During the auction I made what I consider one or best purchases of the auction , the Scanner Logbook, 2nd edition, more at-out this Logbook in next months magazine. Also this would be one of the first auctions at a radio convention that I did not purchase a T-Shirt, most were to small.

After the auction it was off to Moeraki for a Maori hangi, boy what a meal. This was followed by a visit to the Moeraki Lighthouse to see the yellow-eyed penguins, but unfortunately they must have learnt we were coming and none were home except for one penguin who was being fed up at the lighthouse by alady whose husband and her look after the area. They were some light hearted moments when we told that some of the penquins she looks after have names and a story was told about one named Arthur, we won’t go any further with that story, if you wish to know more ask Paul Aronsen.

Upon returning to camp it was learnt that the proposed cricket match had been cancelled, I  suspect by the Australian members because of reported tactics of under arm bowling by the New Zealanders.

After dinner a very interesting talk was given by Doctor Peter Summers and his wife Primrose on their experiences of living and working on St. Helena. Peter passed out several copies of St.Helena newspapers. Most of the people that live on the Island work for the British Government. The only means of transport to and from the Island is by ship.

After this it was back to the various rooms set up with receivers for more late night DXing, but at first very little DXing was done as quite a number of us were
outside looking at a Aurora Australis which lit up the southern part of the sky. An Auroras Australis, which is also called the southern lights, occurs from time to time after activity on the surface of sun. The lights were still there when I headed of to bed at about 1.00am.

Monday morning found another North Otago sunny day and after having breakfast it was time to sadly start packing up and pulling down miles of aerial wire. After morning tea the Convention was official closed with the awards etc for the most DX, knitting (which was won by Gwen Aronsen) and
other awards made. Then it was time to say our farewells. Now I must say it was great to catch up with Harry Weatherley and Don and Gwen Cook from Melbourne again. It was great to meet Peter McMillan from Adelaide for the first time and also the Editor of DXers Calling Brian Dodgson and his wife Deborah who were with us Saturday night. I hope you all enjoyed your stay
in New Zealand. To other members present it was good to meet you all again. To finish this report I must say thank you to the ladies from of the Presbyterian church who came out and cooked such wonderful meals for us all, I arrived home several pounds heavier. To the North Otago Branch and especially Paul Ormandy, Peter and Jill Grenfell, Basil Jamieson, Arthur Finch and Alistair Sutherland, those attending all thank you for a wonderful and well organised Convention. 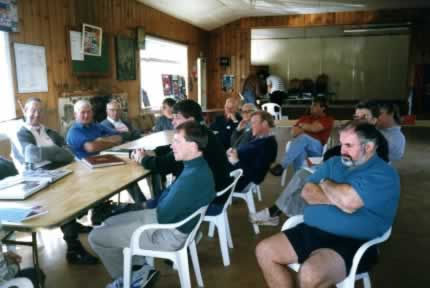 One of the discussion groups 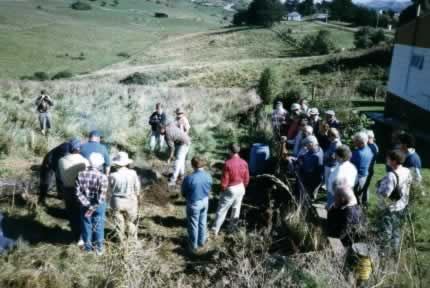 “Lifting the hangi”. A hangi is a traditional Maori cooking style involving steaming meat and vegetables in a covered, heated pit. A fire is lit int he base heating large stones (or chunks of railway iron as above!). Then the food, wrapped in parcels, (historically large leaves though tin-foil is now used) placed in baskets and lowered into the pit which is then covered till the food is cooked. 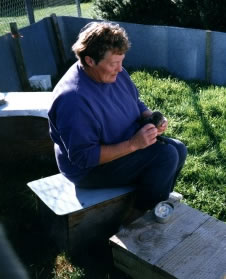