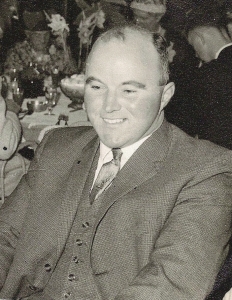 This Tribute to Dudley was penned in 2013 and is based on the recollections and historic research of the writer Bill Marsh (Jnr.) with assistance from his daughter Bronwyn Perkins of Invercargill and other family members. Thanks also to Frank Glen for helping identify some of Dudley’s receivers. Other members of the Southland Branch, both past and present are welcome to add to this Tribute.

Dudley was in the Air force during WWII and it is probably through the possible exposure to radio that he became interested in DXing. After his discharge from the services he returned to the home of his parents Norman & Florence Carter who were living at 91 Avenal Street, Invercargill in August 1944. Norman’s name appears to have been associated with the Southland Branch of the NZ DX Club so this may be where the interest stemmed from. Dudley was an active DXer at this location however nothing is known of his DX achievements. As a single DXer any meetings held here would have been hosted by his very supportive parents.

For most of his early married life as an active DXer, he lived on a lifestyle block at Lornville bounding on the Invercargill to Winton highway. He had a modest aerial system set up at this location with all aerials orientated in a westerly direction. There is mention of a working bee at Dudley’s in the November 1947 “Burble”, when a 300 foot long aerial was erected. Those in the working bee were suitably rewarded shortly after with the reception of WPNA Chicago, Illinois, a 250 watt station on 1490 kcs. In later years he moved into town residing at a number of address’s before finally residing in Antrim Street. A purpose built garage was built at this latter location to store his collection of radio equipment and records. Several large aerials were erected at the back of the property to enable him to continue his DX listening interest. By this time like a lot of other DXers he had become licensed as an Amateur Radio operator and some of these aerials were to enable him to have 2 way contact with other “Ham Radio” operators. His call-sign was ZL4GB. Whenever his family visited he was always out in the garage tuning in to some foreign radio station or in 2 way contact with other hams.

When I was growing up, Dudley was a frequent visitor to our family home in South Invercargill and I got to know him very well. When I started work in 1962, I used to frequent Carter’s Clothing Store in Tay Street, Invercargill, looking for trousers etc. Looking back I guess this was part of the ritual all adolescent males went through at this age. You were always greeted by either Dudley with a big beaming smile and a tape measure around the neck or his brother. Dudley was a third generation member of “The Carter Family Clothing business” which was founded by Joseph Charles Carter in 1901 and was a Boys and Menswear shop.

He would come to our place for branch meetings and often stay on afterwards for some Broadcast DX on Bill (Snrs.) Hallicrafters S18. He was also an early recipient of a “Marsh Special” receiver which was constructed at “number 429” in 1950 and on-sold to another DXer in 1956 and so he would have spent a considerable amount of time in our workshop undertaking the construction under the watchful eye of Bill Marsh (Snr.)

Dudley was an active cricketer in his younger years and participated in the club’s many and varied social antics, sporting matches & functions. He held various executive positions within the club over the years including; head of the magazine committee, president, vice-president, auditor, convenor of the social committee and treasurer, each for at least 1 term.

From the June 1950 issue of the SOUTHLANDDX DIGEST … This issue we intend to present a series of one act plays but firstly we proudly display a photo of the 1950 Health Stamp. We know this will be of intense interest to all philatelists and anyone cranky on hairials. 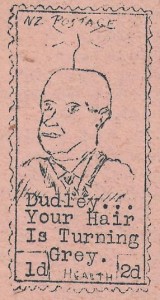 From the August 1950 issue of the SOUTHLANDDX DIGEST … The announcement of the big soccer match against the Fire Brigade at the Biggar Street grounds. Amongst the forwards is D. “Footslogger” Carter.

From the July 1951 issue of the SOUTHLANDDX DIGEST … It is announced that Dudley Carter that ardent photography hound, has an enlarger on the way. We hope he doesn’t let it go to his head, or his waistline. However, his log could probably do with a bit of enlarging ….

From the October 1953 issue of the SOUTHLANDDX DIGEST … Dudley Carter has certainly been living up to his name. Cartering car loads to and from the meetings. We hope to see him Cartering carloads of verifications one night. Earlier issues alluded to the fact that Dudley had become the proud owner of a Vauxhall Velox motor car. It is also apparent that bottle feeding babies hampered his time DXing on the radio for a time and hence his verification tally.

From the August 1958 issue of the SOUTHLAND DX DIGEST … It is announced that Dudley has 300 day old chickens. Raising chooks was another of his passions.

From the December 1958 issue of the SOUTHLANDDX DIGEST … The 1959 Convention Committee is Dudley Carter (Convenor) …….

From the March 1960 issue of the SOUTHLANDDX DIGEST … Hi There Bronwyn. – Congratulations to Gladys and Dudley on the arrival into this world of Bronwyn Anne Carter. It is suggested that Dudley concentrate more on DX and spend less time with the birds and the bees.

Dudley had many interests including; Gardening, Stamp Collecting, Bowls both Indoor and Outdoor, DXing and he loved his faith. Radio being his passion, he built a Campervan to cater for many overnight trips around Southland to listen into his radio without interference. From the latter part of the 1970’s he also used a house at Orepuki as a DX location. Like a lot of other Southern locations this would have been a great place for DX and I imagine quiet and interference free.

Some of the receivers used over the years have included; “Marsh Special”, Yaesu FRG7, Pye “Intercontinental” and an ICOM IC-R75. The R75 was his last straight DX receiver owned, after which he bought various modern transceivers for his new interest of ham radio.