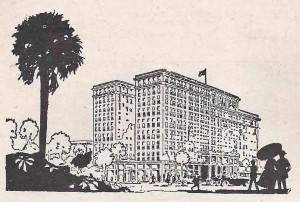 Left: The Hotel Hillsboro which houses the Tampa studios of WFLA, referred to in the following article.

MANY beginners are apt to think that when they do not hear the call letters of a station there is no other way of identifying it. This is not so, as quite a number of stations have interval signals or a slogan. In the U.S.A. nearly every station has its own particular slogan which is regularly announced when the call is given. To mention them all would take up too much space, so I will confine this to those that are heard fairly regularly. Incidentally this will also show what is in a station call and how slogans were born.

Generally speaking the reasons behind the call may be classed as follows: civic pride, newspapers who own or partly own nearly half of the stations in U.S.A., personal and miscellaneous.

Many and varied are the reasons given, but for frankness WSAZ leads with the “Worst Station from A to Z,” but I understand that since new equipment has been installed the slogan now is “With Service from A to Z.” In Alabama there is a strip of land known as the Black Belt in the centre of this is the city of Selma and radio WHBB. When this station was officially opened one speaker referred to it as the “Whole Heart of Black Belt “ – and so slogans are born.

Station WEBR says, “We Extend Buffalo’s Regards,” and “Why Stay Up North?” asks WSUN in St. Petersburg, while its sister station is content to give its location West Florida, thus we have WFLA. We are advised to “Watch Akron Develop Commercially” by WADC, and to “Kum to Hot Springs!” by KTHS, which by the way was originally a ship’s call.

With true Southern hospitality WTOC in Savannah regularly announces, “Welcome To Our City,” and aptly identified is the “World’s Play Ground” through WPG. Station WRR who does not have a slogan was once paid a compliment by a blind listener who suggested, “Worries Ready Relief.” WTNJ simply indicates Trenton, New Jersey, and WBAL, Baltimore. Station WRVA has had several slogans, being in the early days, “Wonderful Richmond, Va.”, then it was changed to “We Rule Virginia’s Air,” but this was often countered with “We Ruin Virginia’s Air,” so a competition was held and the winning selection was “Women of Richmond Very Attractive,” which appealed to the station manager who at the time was a bachelor.

in South Carolina lettuce, cabbage, celery and spinach grows abundantly and as these all contain great quantities of iodine WIS was soon known as the “Wonderful Iodine State.” In addition to the above there are many stations that have popular slogans with no bearing on the call letters whatever, for instance, KMOX “The Voice of St. Louis,” KFOX “Where Your Ship Comes In,” KIT “Voice of the Yakima Valley,” KFNF “The Friendly Farmers’ Station,” WQAM “The Voice of Tropical America,” WBCM “Where the Summer Trails Begin,” and many others too numerous to mention.

BY the time that these lines appear in print it is highly probable that the three-millionth wireless licence will have been sold in France. Broadcasting in that country is increasing in popularity at a much greater rate than at any time previously, and the whole of the French radio industry is looking forward to a period of great prosperity.

THE number of licensed listeners in Ceylon is now rapidly approaching the 4000 mark, there being a steady increase of from 50 to 100 per month. 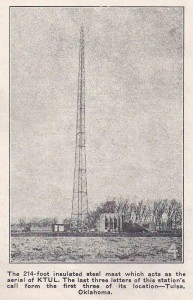