This month’s cover depicts an incident in the history of Radio Communications which, with the following article, drives home the advance from 1899 to the present day; the author, a “pukka” communications engineer, carries the idea further. 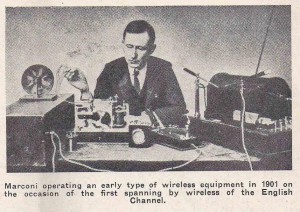 WHAT a remarkable art communication is? Twenty-five years’ association with it has seen so many stupendous changes that, as to be expected, this recording of thoughts will but touch the fringes of the subject, picking out a thread here and there, tracing it from its source and stretching it towards the mythical future.

A quarter of a century ago it was common practice to talk through a gas pipe, calling by means of blowing a whistle at the other end. Today the latest adaption of this means is the co-axial cable— a cable of one wire, co-axially suspended in a copper tube by an extraordinarily ingenious process of manufacture in a perfect dielectric, air, over which frequencies as high as 2 megacycles (2,000,000 cycles) can be passed. The same gas pipe idea, if it is pardonable to stretch imagination, but instead of one communication path we find that no less than 240 simultaneous conversations can be effected.

Two and a half decades ago the communication engineer was easily able to cover all the aspects of the art. Every engineer was, and had to be, an all round general utility man. Necessity was ever the mother of invention and the war years of 1914-1918 saw a concentrated effort applied to radio, with the result that there became two distinct branches of the family. The development of the valve soon brought forth the third branch known as transmission or, in other words the propagation of speech over long distances by means of voice frequency repeaters, or devices which amplified speech currents within the 100-2700 cycle per second range, over toll line or loaded cable.

This later developed into carrier transmission over open wires, or the application over open wires, or the application of voice currents on to frequencies varying from 6 to 30 kilocycles; these high frequencies being so chosen that certain groups or bands act as the carriers of the voice currents and are so separated in frequency characteristic that four simultaneous conversations can be obtained over one pair of wires without the least sign of crosstalk or overhearing. In a few words, a form of wired broadcasting.

During this stage of development the technique of cable loading was evident and much progress was made in the automatisation of telephone switching (automatic telephone exchange). In cable loading the inherent attenuation or resistivity of the circuit is so arranged by means of balancing inductance and capacity, or in other words impedance, that speech currents suffer the least possible loss.

And so up to five years ago communication, as a father, had six strong and verile sons.

Development was so concentrated and rapid that the communications engineer was forced to specialise – each branch bearing but little relation to the other. In recent years these branches have had such enormous growth that they are overlapping each other and, today, to some extent, are acting not as a brake on progress, but keeping each within bounds which must aid the other.

For instance in Europe, national dialling – that is the ability of a subscriber to obtain for himself any other subscriber in the same country is an accomplished fact. This has called for the closest co-operation on the part of all six brothers. International dialling is not far distant. In fact, but for the intense national feelings now too uncomfortably evident in Europe, it would be an accomplished fact within the next five years. There are but few technical difficulties to be solved but progress will necessarily be slow, if only for the reason that, for the moment, the specialists are busily engaged in studying aspects of the art other than their own: “Prancing here, dancing there, Jigging jogging everywhere, Altogether in the communication dance.” to paraphrase a well known song.

So much for the prelude – what is it all leading to may well be asked? What has all this to do with us in New Zealand?

It is not too “Wellsian” to state that long before a good many of the readers of this article play their harps, it will be technically possibly for a subscriber in New Zealand to call, for himself or herself (one must not forget the ladies), anyone else in the world who is connected to a telephone exchange. It may happen something like this: we wish to call Mr. Wun Lung in, say, Shanghai. Lift the receiver – after receiving an intimation by a voice saying “You may call,” (so much nicer than the present dial tone) speak into the microphone and say “Shanghai 5678,” this being the number of Mr. Lung, found by you in the world’s directory, microscopically printed on a paper roll enlarged to readable size by magnification. The words “Shanghai” and the numbers “5878” will be recorded magnetically on wire or film from which will be derived the necessary electrical translations and impulses to route your call through the automatic switch gear of the local exchange – over a co-axial single conductor cable which has 999 other paths available to a central international toll switching exchange. The signals up to here are in the higher radio frequencies. More switch-gear at this toll centre operates and selects a shortwave beam radio channel to another toll switching centre, say in Moscow.

At this stage if there are no channels available to China via Russia and Manchukuo a voice will say “Shanghai is busy – kindly call a little later please.” But suppose, as no doubt will be the case, that there are an adequate number of paths available – further impulses of suitable frequency and code will be transmitted by equipment over cable or open wires or by ultra shortwave radio links from Moscow to Dalny in Manchukuo and thence by carrier over cable to the Shanghai exchange where a train of automatic switches will receive further pulses, now of voice frequency, and obtain the called party. Intimation that Mr. Lung is being obtained will be by a voice saying, “Your subscriber is being called” instead of ringing clicks, and, when the called party answers each will be able to see the other by means of vision screens on their instruments. During this time you have not been at your instrument long enough to get a cigarette from your case and light it.

Furthermore a machine has already recorded that: (a) You have made a call to “Shanghai 5678”, (b) The time you started, (c) The day of the month and year, (d) The amount of the charge per conversation period

When the called party answers this machine will record: (e) Your number: having found it by detecting V.F. signals emanating from your line circuit, (f) Each chargeable conversation period,

and when the call is finished will produce a ticket which will later on appear on your telephone account.

Now, at this stage, those readers that have not previously been bored will say that the perpetator of this fantasy is ready for the “Bug” house. Far from it. Just let us look and see how far we are towards this end at this very moment.

(1) English is fast becoming the universal language of the speaking world, so calling by the same language can be standardised.

(2) Magnetic and many other methods of voice recording are available (Lorenz, Blattnerphone, Film)

(3) The translation of these recordings into electrical equivalents is in use (Talkies, Broadcasting, Television)

(4) Storage and translation of impulses (automatic telephone system): the Rotary system which is a machine driven digit storing system which serves 84 per cent of the subscribers on automatic exchanges in New Zealand today; the Director, “step by step” (Strowger system which is in vogue in Great Britain.

(5) Signal and voice transmission at radio frequencies is used every day (radio services).

(7) Conversation over the air Is secret (speech inversion).

(8) Television is developing rapidly (Alexandra Palace vision signals have been received in New York 3000 miles away).

(9) Open wire carrier systems and radio links across Russia are in course of erection.

(10) Carrier over cable is an accomplished fact (Bristol to Plymouth 12 channels over one pair).

(11) Voice instead of tone for signals is in use (talking clock and subscriber engaged service, etc).

So it would seem that all that is required is co-operative development – the converging of the specialists’ activities under one common control. Such a state of affairs is by no means easy in a nation. It is even more difficult to encourage it internationally.

The preparation of the tender specification for the equipment to carry out this peep into the future would be far more amusing to watch than a wool sale or a “choke-oh” match.

In days gone by, fire was obtained by rubbing two pieces of wood together. In days to come slide rules will produce the same phenomena because, although the equipment in style and form exists today, it is the overall technical characteristics that will cause the headaches, and the little boy who today takes kindly to his sums may be one of the “all-rounders” responsible for the tender specification. It is largely a matter of mathematics, production technique and co-operation.

This article purposely refrains from touching the telegraphic side of the communication art, not that it is any less or any more, interesting, but to have brought telegraphic progress into the scope of this article would have complicated the issue and a peep into its future can very well be left to some future occasion.

Did someone ask if there would still be wrong numbers? Let the question be answered this way – the man that stutters will be Internationally speechless!