Growing up with a Radio Technician & DXer as a Father 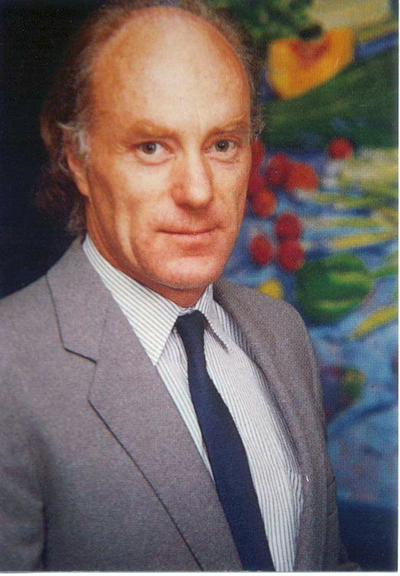 My dad (Bill Marsh Snr.) was a self-taught radio man and a broadcast band only DXer. My mum and dad who were married in Green Island near Dunedin had moved to Invercargill and into a new house about a year before I was born in 1944. By about 1948 my dad had built a large radio workshop at the back of the house. I grew up with radios and signals all around me, so DXing, radio construction & repairs were very soon running in my blood. As a consequence I spent a lot of my time in the workshop with my dad. I started building crystal sets at a very young age. My dad always set a high standard and anything I built that was not up to his standard would have to be dismantled and rebuilt. He had a favourite saying which I adopted also, “if something is worth doing, it is worth doing well”. This became the guiding principle during my adult life both at work and at home. The building of crystal sets extended to building them for my school buddies also. I well recall that some of their parents were not keen on having aerial wires strung around their back yards, something very necessary for the reception of radio stations. I remember going to a lot of trouble to use the metal spouting’s as an aerial, which required that any metal downpipe or flashing be isolated from earth to stop the grounding of the radio signals. This eventually led on to the building of Hikers One’s and Hikers Two’s, 1 and 2 valve radios powered by batteries. A number of my school mates were recipients of these also. One of my hiker’s two radios was well capable of picking up overseas radio stations on broadcast and I remember being excited by its performance. At that time the NZ Post Office had a telephone repair depot in Levin Street in Invercargill and they had a great supply of what was referred to as number 6 cells, a large 1.5 volt battery which was used in the older telephones. These cells were changed at 12 monthly intervals regardless of their state of discharge and these were freely given to schoolboys for use in their radios etc. Also freely given was some of their unwanted telephones and I recall spending many hours setting these up at friend’s houses in the neighbourhood so we could talk to each other. A far cry from the cell phones of today. Later in life this same depot became the source of solid strand copper wire for aerials. The batteries were great for powering the filaments and h.t. supply of these valve radios, and there was always a box of them under my bed. I used to sneak one of these radios into bed with me each night and hide the headphones under the pillow. I used to think that mum did not know about this, but I guess with hindsight she probably just turned a blind eye as I usually went off to sleep rather quickly and the music obviously helped.

As I became older and more experienced I ventured into the repair and tuning of radios and later design & construction. Naturally enough I became interested in the hobby of DXing and joined the NZ Radio DX League in early 1959. Like my dad I confined my interest to the broadcast band as this was in my opinion the most challenging. I remained a very active DXer till March 1964. I was never very good with the paper work and reception reports were often not written up and sent away. I introduced one of my school friends Ray Crawford to the hobby of DX and he has remained very active for many years. Our family had access to a large block of land at Otatara bordering on the Oreti River. My dad had set up a vegetable garden and Ray and I had set up an aerial system. There was always a need to get as far away from power lines to increase the chances of hearing very weak overseas radio stations. The owner of the land placed some restrictions on aerials as the land had a lot of native bush which needed to be retained. Ray and I used to cycle to this location during our high school years with a battery radio strapped to the bike. Some good South American DX was heard at this location. After I started work and purchased a car we had the luxury of being able to take better radio equipment with us. There were a number of trips away to other DX locations by Ray and I over these years including Riverton Rocks on a regular basis, Long Beach near Dunedin and Leithfield Beach north of Christchurch. I well recall a trip to Ken Mackey’s listening post at Long Beach and being amazed at hearing North American stations on the broadcast band at 4 o’clock in the afternoon. Our home at 429 Elles Road was significant in its own right. My dad had erected three aerials each being some 400 feet long in a NW, W & SW direction. I did most of my DXing on his Hallicrafters S18 communications receiver set up in the kitchen and this was used by all of us for our DX. Ray and I spent many a night in the workshop to enable us to do some undisturbed DX using the S18 and other receivers. We both had trouble hearing alarm clocks and missed many opportunities as a result.

Whilst I was a pupil at the Southland Technical College I worked after school for the NZ Post Office telegram depot. It was at the telegram depot that I met a like-minded person by the name of Noel Finnerty. Noel had been introduced to radio at the Secondary High School that he attended. We became very close friends and he spent a considerable amount of time at our place where he picked up a lot of radio knowledge from both my dad and me. Noel and I became interested in transmitting radio signals between our respective houses. We had access to a lot of war surplus radio equipment and used it to transmit illegally in true pirate fashion. This eventually led to a desire for both of us to obtain our amateur radio licences and become ham radio operators. This we did and Noel was assigned the call sign of ZL4NF and I became ZL4AK. This was to result in the demise of my interest in DXing as there was no report writing involved. By this stage I was the proud owner of a Hallicrafters SX28A communications receiver which I had bought from the American Embassy in Wellington.

For the five years before my marriage I spent a lot of time retrofitting old receivers for fellow DXers including repairs to and tune-ups of their commercial communications receivers. I effectively took over where my dad had left off. In this time I also experimented with the design and build of the ideal communications receiver for the standard broadcast band. A new and supposedly better one was always started before the previous one was ever completed. Consequently I never did finish a receiver of my own and had nothing to show for my efforts during that time in my life.

After I married and shifted away from Invercargill my interest in radio took a bit of a back seat due to changed priorities in my life. I did nothing of significance until Joyce and I moved to Waiouru when I then found I had some time for radios. My first job was to build a Single Sideband transmitter of my own for a better chance at making contact with more distant ham radio operators. This proved to be very successful and I worked over 50 countries on 80 metres from this location. I had erected a large wooden pole central to the back yard from which I erected an 80 metre inverted V antenna. The wavelength of this aerial was optimum at the top end of the band for best chance at talking to yanks, however it had little extensions on the two lower ends that could be switched in manually for operation at the bottom end of the band. At some stage I swapped the Hallicrafters SX28A for a Hallicrafters SX101A with one of the other hams in the area.

One of my first tasks to tackle since retiring from work was the design and build of a communications receiver of my own. I had made a decision to quit all my ham radio equipment tending to favour DXing once again. I had a number of ideas running around in my brain that I had thought about over the years since getting married. I decided to use a working chassis from an old valve radio gram to experiment with each idea. As each idea was trialled and either rejected or accepted I would move on to the next. When I was finally ready, I started the task of building my first receiver. The only mistake I made was in using a recycled chassis. I had saved one from a dismantled radio which was kept because it was of a reasonably suitable size and the metal coatings were in very good order with no rust spots. The shape however presented me with some layout implications, but by the time this became apparent the construction of the receiver was too well advanced. Any problems encountered were not insurmountable and there was always a solution. I now have two valve receivers built and although housed in temporary cabinets will ultimately end up in re-cycled rimu cabinets. Their completion achieves many goals set. 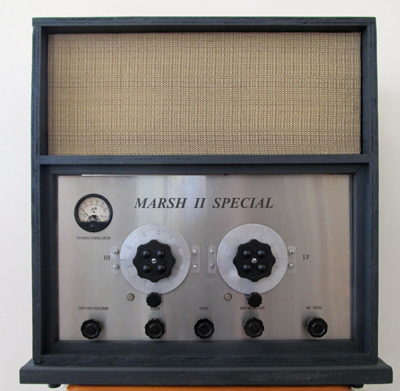 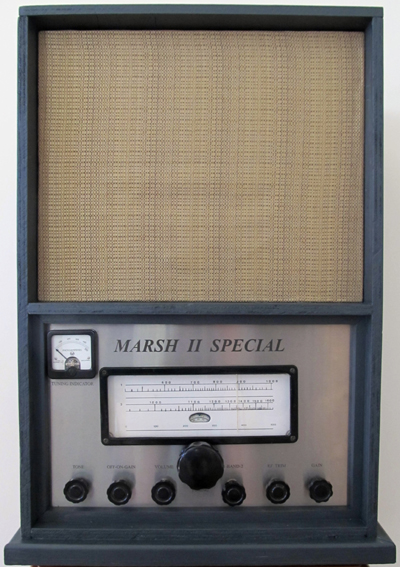 This finishes off, where I left off in 1967, where the main aim at that time was to split the broadcast band into two approximately 600 khz segments. The split in the band is achieved on the two receivers just completed in two ways. In receiver number 1 this is achieved by using two gangs. One gang tunes the lower end of the band up to a mid point where the other gang takes over to tune the upper segment with no overlap. In receiver number 2 the split is achieved by using a band switch and a combination of parallel and series (padder) fixed capacitors in conjunction with the tuning gang. This latter receiver also includes 2 RF stages for extra gain. Both receivers achieve the primary goal set of using only 1 set of coils and although old technology in today’s environment, work very well indeed. I do however now have something to pass down through the family as a memento to my life with radio. It’s now on to a 12 volt powered receiver, which will initially use 12 volt anode valves in the front end and semiconductors in the audio. The valves will change to FET’s after the design is proven. It is my desire to once again hear yanks on the broadcast band and this will allow me to set up in the caravan and visit some power free sites. Hopefully before I depart this planet I will build a receiver with a digital dial, variable selectivity and a synchronous detector.

During my few years as a DXer I managed to verify 346 stations on broadcast from 48 countries. By far the most significant of these was FEN Chitose Japan 250 watts on 1570, WKFE 250 watts Puerto Rica on 1550 and a number of 250 watt stations from the U.S.A.

I am looking forward to re-starting my DX hobby in the near future when I hope to extend my verification and country tally at least a little more on broadcast.