The Collection & Study of Radio Stamps

Collecting and studying radio stamps is a fascinating side to the hobby of DXing.
Throughout the world many countries have issued stamps with a radio or telegraphy theme. There are many topics that can be found on stamps. This can be broadened to include postal cancellations, new stamp issues, First Day covers, early postcards, EKKO stamps (or verification stamps), radio communications (radio telegraphy and wire telegraphy), radio programmes, personalities and anniversaries. 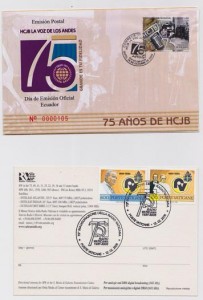 Some countries such as Ecuador have issued special stamps to commemorate their years of service. One of the very unusual and unique Radio stamps was issued by the Dutch Post Office to commemorate Radio Oranje (Radio Orange), which was a programme compiled and presented by the Dutch Government in exile and broadcast over BBC transmitters during the Second World War. The broadcasting service in Holland went into Nazi control when Holland capitulated in May 1940. The first Radio Oranje broadcast from London was at the end of July 1940. The Nazi occupying power forbad listening to foreign radio stations and the transmissions of Radio Oranje were jammed. The two stamps are unusual as they are printed side by side on each sheet. One of the stamps shows a singer “Jetje of Orange” who sang resistance songs. The other stamp shows two men illegally listening to the broadcasts using a home made radio receiver hidden under the floor of a house. The text on the stamps is from the opening announcement giving the wavelengths and greeting sent to Dutch listeners
around the world. There were some first day covers issued which showed the Radio Oranje banners from the original rubber stamp used in London on official correspondence. These covers are now considered collectors items. After the war many of the broadcasters with Radio Oranje were involved in the foundation of Radio Netherlands. 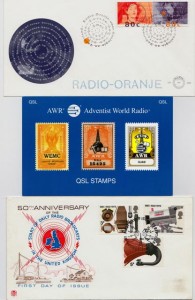 On 23 March 1994, New Zealand Post issued a set of six stamps which took a nostalgic look at life in New Zealand in the 1950s. The $1 stamp featured a portrait of “Aunt Daisy” with a table model radio in the background. “Aunt Daisy” was one of New Zealand’s greatest broadcasting personalities. Her distinctive voice enthralled all ages during her daily broadcasts reflecting the joy and hopefulness of human life. Who in New Zealand at that time can forget the children’s session when she introduced the ‘Cheerful Chirpers’. The theme music for the children was borrowed from the famous march of the American Civil War ‘Marching through Georgia’ and began “Listen now to 2YA, we’ll sing a cheerful song:
Sing it with a spirit that will start the world along:
For now the children’s session’s more than twenty thousand strong;
Big friends and little friends of Radio”. 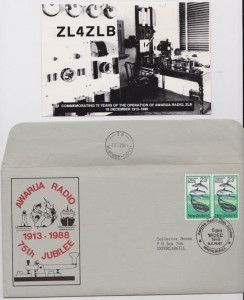 As well as the countries that issued stamps, individual Radio Stations issued QSL or verification stamps. These were called EKKO QSL stamps. I received a QSL stamp from KFI Los Angeles, California (Jan 24, 1952) and another from KFSD San Diego California. (May 9,1952).These are now a treasured part of my collection.

Then there are the unique AWR QSL stamps, which were issued in the 1980s and used by AWR (Southern) Asia. These early verification stamps are now sought after by collectors. With the decline in sending out of reception reports and with verifications becoming more difficult to receive, these early radio stamps and envelopes are becoming quite rare. Collecting radio stamps together with the envelopes and verifications can be an added and fascinating addition to the DXing hobby.