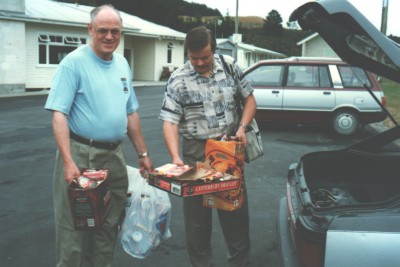 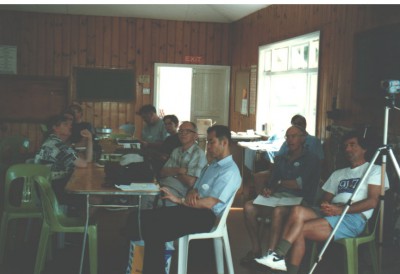 Land of the Long White Cloud

South is the place where we Finnish people long for during the long cold winter. This winter l had a nice opportunity to travel ‘quite‘ south, namely to New Zealand. One of the targets of the trip was to visit the DX Convention held in Camp lona near Oamaru in the South Island of New Zealand. Before my trip l had at lot of connections to NZ DXers via Internet, and they were all very helpful to assist me during my stay in their remote but beautiful country.

First stop on my trip was in Singapore. Among other things l visited one of the big warehouses selling electronics. l was somewhat disappointed of the low number of world receivers available. Anyhow l managed to ﬁnd a Philips AE3750 at a very reasonable price (after talking some time in the shop). I also noted some stores selling ham equipment, but communication receivers were not seen.

Another long ﬂight took me over the Southern Alps of NZ, where you really could see the “long white cloud“. I landed at Christchurch which is the biggest city in the South lsland, and was happy to mect Mark Nicholls, one of the leading DXers of NZ at the airport. I then stayed a few days at Mark’s and we had a very good time talking radio in all ways.

After a couple of days I had almost recovered from jetlag, and Mark received another distant guest, the EDXC auditor Anker Petersen arrived by train from Wellington. Next day we three packed into Mark’s car and drove south. After having passed the 45”‘ southern parallel, we reached Camp Iona in the aternoon to meet with local arrangers putting up the antennas. Paul Ormandy, who is maybe the best-known NZ DXer today, was the main organiser of the Convention, which was attended by about 30 DXers plus a few accompanying ladies.

The average age of DXers has risen also in NZ, but while the Camp was quite modest, everybody seemed to have a good time. Good weather of course helped, but even the rainy Saturday didn’t spoil anything.

A good part of the Convention was let for ‘free‘ time which here meant a lot of listening in addition to social talking and beer drinking. In NZ you can start listening to North American medium wave stations in the evening around 7pm and then stop at 11 or 12 midnight and sleep well before the Europeans come in at around 6am. Very comfortable. And every evening you could hear at least some North Americans, even through the camp was held almost in mid~summer.

Some talks and forums were also held, including myself talking about Finnish DXing and Anker telling about EDXC matters. Also the Japanese guest Toshi Ohtake gave a speech about Japan SW club and DX activities in Japan. On Saturday there was a jubilee dinner which was attended by many old-timers as well. Bryan Clark showed some colour slides from other conventions. One of the old group pictures was upside down, and now the NZ DXers really know that they are upside down!

Nothing lasts forever. On Sunday morning it was time to take down the antennas and collect the empty beer cans. Then was the time for the goup picture and the farewell ceremonies. I drove north with Toshi and learned quite a lot of Japanese ways and culture during the hours. In Christchurch I still managed to visit the Antarctic Centre before starting the voyage back home. Christchurch is the centre for ﬂights to McMurdo Base in Antarctica and nearly every day there is a connection to the ‘deep’ south.

I decided that the ice and snow in the Antarctic Centre was enough to me during this trip (I expect to have more of it back home) and I headed back to Singapore, and then a couple of days later back to Finland.

The 50″‘ Anniversary Convention of the New Zealand Radio DX League will stay in my mind forever. Of course the long trip makes it an adventure by itself. But the friendly spontaneous climate of this Convention was perhaps the best l have ever enjoyed. Low-level facilities of the camp make it very cheap to attend. Still we were served with good big meals very often and everything was working. I have never before attended a DX Convention were you are put to the dishing and cleaning group, but I actually enjoyed it. And in my opinion low-cost meeting are necessary to encourage more average DXers with.

If you have the opportunity to attend the next NZ Convention to be held in 2002, don’t hesitate to take it. And don’! ask me about electricity systems in Auckland. I didn’t visit the North Island. You can ask Anker, he stayed in Auckland a few days!

Risto is the Secretary General of the European DX Council. This article ﬁrst appeared in the March 1998 issue of the EDXC newsletter ‘Euro DX’. 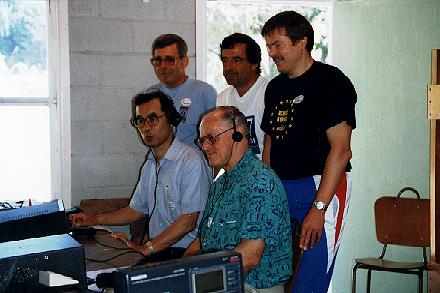 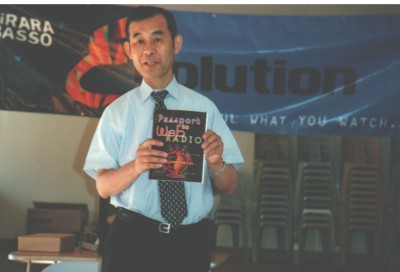 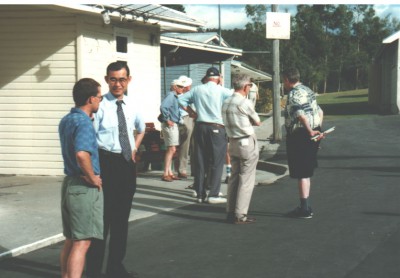 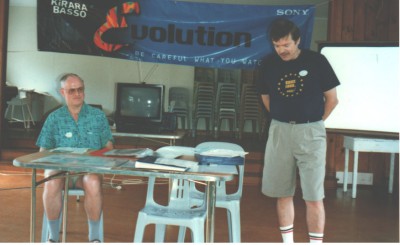 The first New Zealand DXing of broadcasting stations dates as far hack as 1930 when low powered North American MW stations were caught on simple receiver sets. After some attempts to organize DXers, the New Zealand Radio DX League (NZRDXL) was formed after World War ll in 1948 and can therefore celebrate its 50th Year in 1998. I had the great pleasure to represent the Danish Shortwave Clubs lntemational (DSWCI) on this occasion.

The Convention was held on 5-8 February 1998 at Camp Iona near Oamaru in the South Island of New Zealand. It was very well arranged by the local DXers and chaired by Paul Ormandy. 31 look part in the whole Convention including 5 foreign DXers: EDXC Secretary General Risto Vahakainu (Finland), the Chairman of the Japanese Short Wave Club (JSWC) Toshimichi Ohtake, from Australia Chris Martin and Ray Crawford, and myself.

Several lectures were given and current DX topics discussed during the Convention. Their problems are the same as here in Europe. Very few young people feel attracted by our hobby resulting in falling number of members (currently about 350, some years ago 900) and increasing average age of the members. Toshi Ohtake could report that in the 1970 there were 400,000 Shortwave Listeners in Japan. Today there are only 400 members in the JSWC, but they are real DXers. The future of our hobby therefore was discussed and particularly how the internet can best be utilized to attract newcomers.

The Convention had several nice social events, such as a DX Quiz, greetings over the air ﬁom various broadcasters, a scenic tour, a golf putting contest, a Radio Sprint Contest (identify certain speciﬁed broadcasters within a limited time), an auction and of course DXing during the dark hours where several North Americans and SER Santander, Spain 1485 kHz were heard on MW.

Saturday at 1pm a delicious Anniversary Dinner was held at a coastal restaurant with 50 DXers and wives taking part. Amongst them was one of the founders of NZRDXL, Jack Fox. Many other oldtimers had shown up and told their stories about how they did DXing hack in the forties and ﬁfties. Interesting to note  that the spirit of DXers at that time was the same as we all know it today.

It was really a pleasure to meet all these friendly and uncomplicated DXers in New Zealand, and the DSWCI wishes the NZRDXL all the best on its next 50 years.

Anker is Chairman of DSWCI, on behalf of his organisation, presented the League with a pictorial book about Denmark to mark the 50th anniversary. This article ﬁrst appeared in the March 1998 edition DSWCI’s “Shortwave News “ 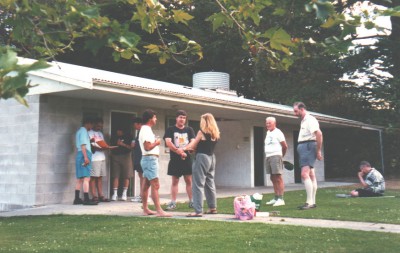 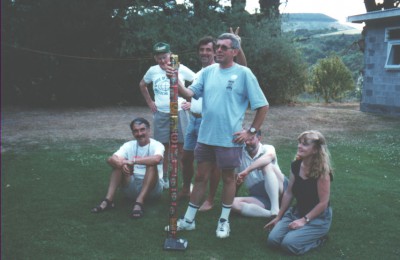 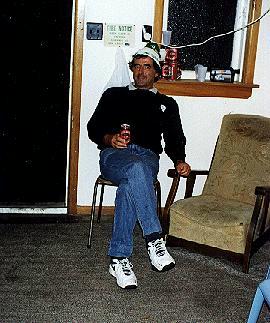 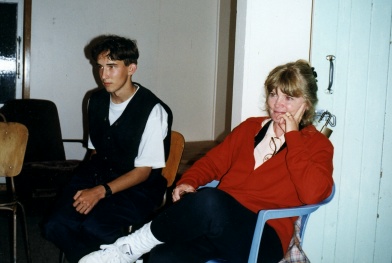 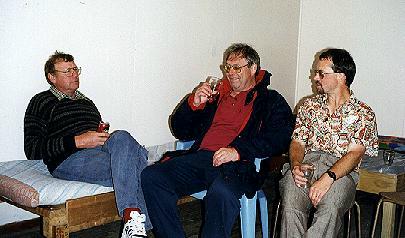 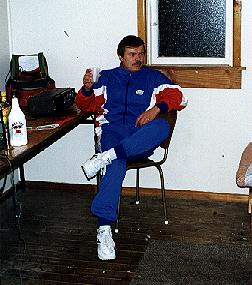 Risto Vahakainu introducing us to ‘Finlandia’ 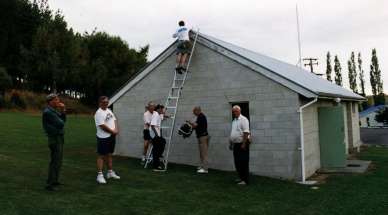 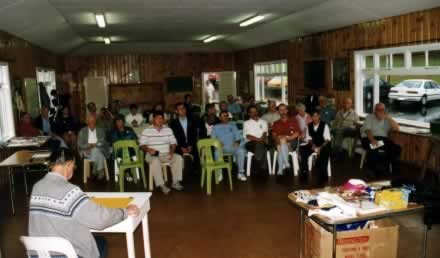 The auction is always a highlight… in 1998 we were very fortunate to have several portable receivers, noise-cancelling headphones and other gear kindly donated by Sony NZ Ltd, plus a large number of itmes from the late Arthur Cushen’s estate. 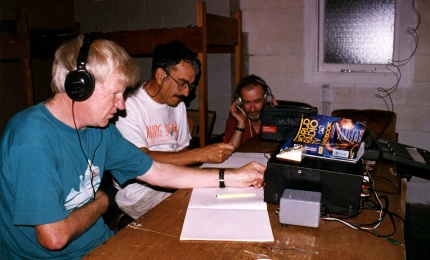 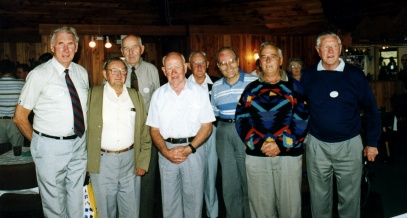