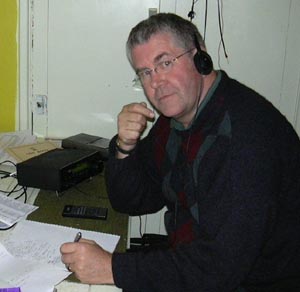 My first interest in radio came via a friend of my grandparents, Les Cufflin. Les was an Auckland DXer from the 1930s, who had been a member of the RA. By all accounts he was a pretty good DXer too. He used to talk to me about radio. He eventually gave me his collection of QSL cards, which have, I think, ended up in the Hocken library. The only card I still possess is a rare one. It is for KGIR in Butte, Montana and is printed on a thin copper sheet. Very, very few New Zealand DXers heard it – only Merv Branks, that I know of.

Anyway with ‘Uncle’ Les’s encouragement I first decided to have a go on shortwave. I logged Radio Nederland, sent an aerogramme off addressed simply to Radio Nederland, Holland and received a verification back – a black and white card featuring a photo of Tom Meyer talking to someone in a field of tulips! I was so proud.

However, it was Mediumwave that attracted me. I acquired an old valve radio from an elderly neighbour. Its aerial was a wire up to the chicken mesh under the tin roof of the house. It sounds awful, but I heard quite a bit. 2KM on 530 was my first MW QSL.

I complained to Arthur Cushen that I couldn’t hear Yanks. He patiently told me to stayed tuned to 1ZB (1070 in those days) and when it went off at midnight a Yank should be there. Bingo – problem solved and like Paul Ormandy, KNX was my first Yank QSL. Suddenly there were Yanks everywhere, or so it seemed.

When my old radio finally gave up the ghost and I acquired a ZC1 and then an old radio that had come from a Wellington bomber – I cannot remember the make, but it was a good set. With this new set I heard a large number of Hawaiians. KGMB 590, The Coconut Wireless Network, was a regular caller. Alan Roycroft was very supportive and his yellow QSL cards always came back with a friendly and informative message on the back.

In 1978 I won the Young DXer of the Year title and went down to Invercargill to receive it. I was hosted by Ray and Raewyn Crawford, met Paul Aronsen for the first time, as well as Arthur Cushen, of course, Eric McIntosh, Steven Greenyer, Charlie Chester, Lindsay Robinson, Jack Fox, Harry Weatherley was visiting and Arthur Williams, at whose place the event was held. I went to Tiwai for the first time. We didn’t hear a lot, but we did have a decent earthquake. It was the first of many visits.

I remember attending an AGM around 1978 in Oamaru. I went down with David Ricquish in his trusty yellow (I think) Morris 1300. We got just the other side of Ashburton when the temperature gauge rose alarmingly and we had to stop. It was early Sunday morning and not a lot was open. It transpired that the radiator had run dry. David hadn’t realised you had to top it up! With makeshift repairs we had to travel at a constant 80 km/h. That is fine until you come to towns. Timaru was traversed at 9am on a Sunday at 80 km/h and we travelled through the long stretch into Oamaru an hour later at a similar speed. We made it. It boiled happily as we pulled up at the Brydone Hotel. Getting home late at night wasn’t as much of a problem!

I went to live in England and began doing some DX there. Quite a bit could be heard from Europe but that isn’t surprising considering it would fit into the Tasman Sea! While there I bought an AOR 7030, later modified to be a 7030+. This changed DXing entirely.

On my return to New Zealand in 200 I took to the hobby with a passion. Highlights have included logging Kenya on 1386 at John Bastable’s place in Kingaroy, Qld on a EWE. On the parallel EWE pointing in the opposite direction was Tarana in Auckland blowing everything else off the airwaves at 9am NZ time – the power of the EWE.

Trips to Tiwai, logging the Bahamas, France on LW, Panama and Tasmania (during the day); Waianakarua logging a 133 watter in Florida, Uruguayans, Argentinians and Brazilians. A trip to Greytown staying with Mark Nicholls at Tony King’s place logging low powered X band Yanks peaking as their dawn arrived, on Tony’s BOGs (Beverages on Ground) – wonderful stuff.

I first joined in 1976. In those days you had to mail your contributions off on separate pieces of paper according to what you wanted to contribute, to Wellington. They were then sent out to sub-editors. Mailbags were huge, the list of catches impressive and the ladders very keenly fought.

For a while I did the Ladders for Bryan Clark and then, I think, Arthur de Maine. They were typed onto special sheets, which were then scanned for printing. They were a nuisance when you made a mistake!

When I went to Europe I dropped out of the League and joined the British DX Club – a fine body but not with the same camaraderie. I rejoined in the late 90s. Since then I have assisted where I can with the DX Times. I have edited Over 9 mHz, the Mailbag and the Ladders/ Continents section for the past 12 years. I have also written the odd article and have been Chief Editor since Mark Nicholls untimely passing in 2014.

I have only been to a handful. The first was in Auckland in 1980. I remember listening in awe to Radio Auckland 1 and Radio Auckland 2 on FM. NZ didn’t have FM then. They were pirates and were broadcasting from a van driving around Auckland trying to avoid the Post Officer detectors. I even got them verified.

There was a later convention at the end of the Whangaparoa Peninsula in 1990, which I also attended. DX was not good at either of these.

The next one was at Camp Iona in Oamaru in 2002. This was also a lot of fun and it was here that Paul Ormandy was deservedly made a life member of the League. Reception was good and I logged quite a few stations. Meeting the legendary late Don Reed was also a highlight. Jack Fox was there as were Dr Adrian Peterson (AWR) and Adrian Sainsbury from RNZI.

We had the ‘Farewell to Tiwai’ mini convention in 2003 as well – again the DX was good and so was the camaraderie. There were some good DX catches too. I had to leave it and go to Oamaru for a wedding for a night. Much to my horror, the night I was away was a bumper DX night – typical. However, I managed to get Radio Maria in Panama on MW later.

The gathering in Kingaroy, Qld in 2005 was also excellent. Logging Kenya on MW was the highlight, but the camaraderie was even better. Learning about what could be heard on a crystal set was mind blowing!

On rereading the above, it occurs to me that what is important in this hobby – and it isn’t who has how many veries or who has won what competition, is who your fellow DXers are. I have made some wonderful friends. Among them are Ray Crawford, Paul Aronsen, Sutton Burtenshaw, Steven Greenyer, Bryan Clark, Arthur de Maine, Paul Ormandy, Frank Glen, Mark Nicholls, Alastair Stewart and David Ricquish – really good friends. We have had some great times together. All of us come from different backgrounds united by a common hobby. I certainly privileged to count them as my friends and am the better for it.

I have been DXing now for 45 years and can easily envisage another 45 if I last that long!!

Big L, 1134 (ex pirate) commemorative broadcast from a boat tied up at Frinton on Sea, Essex. It was heard during daylight hours in Crowborough about 40 or 50 miles away, broadcasting with 1 watt – yes 1 only. It was intended for a local audience and they couldn’t believe I heard it.

Radio Centinela de Pereira, Colombia, 2kw. WRHC in Coral Gables Florida 1550 kHz, 133 watts, this proved Ray Crawford’s old adage – power is nothing, propagation is everything, because it sounded like a local!