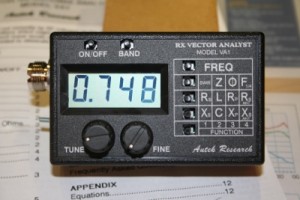 Early this year I emailed MJF Enterprises to inquire if they made an antenna analyser that operated at MW frequencies, the answer was no. By chance Jim Searle from Dunedin visited an Oamaru Branch meeting at Waianakarua and had with him an Autek antenna analyser that was designed primarily for the ham bands. A quick check of the Autek web site on my return home showed they manufacture an analyser that covered from MW through SW.

Availability was either through Autek in the States at around $NZ300 or via their Australian agent, at $NZ400, mine arrived in five days from Florida by insured airmail. There’s an old saying that you have to be mad to be a Dxer and paying $300 for a cigarette packet sized box with a few switches confirms that in my case. However if you are interested in the technical side of Dxing and antennas in particular, receiving this little box is just about as good as a new radio.

For the non-technical here is a brief explanation of what this antenna analyser is and does. In the old days and probably still today, Hams used devices such as grid dip meters, power meters and swr meters to test and adjust antennas to best match their transmitters to their antennas. About the best I have seen Dxers do was wind baluns to match antennas to coax lines, and a few took some convincing of the benefits of that. The Autek VA1 is basically a small, variable frequency signal generator attached to a very smart processor of some kind.
One connects the VA1 to an antenna and selects the frequency of reception on the LCD readout.

You can then use the device to measure a wide range of antenna characteristics including: capacitance, inductance and impedance. Correctly matching an antenna and a feeder line such as coax to a radio can result in an increase in signal strength and a reduction in man made noise. As an example I have used an active antenna on mw for many years, always knowing that on the lower end of the mw band its performance dropped off noticeably. A check of the impedance of the antenna on the LCD readout showed that it was very low, from the radios point of view, at 700kHz it was almost looking at a short circuit on the antenna
lead. I have since modified the antenna to overcome this and it now works much better. The  analyser is capable of many more technical functions, such as checking baluns and while it comes with a comprehensive manual I will have to spend some time refreshing my knowledge of antenna theory if I want to get the best out of it.

If you are not technically inclined then the device will be of little value to you but if you like experimenting with aerials and have some basic knowledge, then it is a useful device to have in the toolbox.

Please note: Autek is no longer in business.