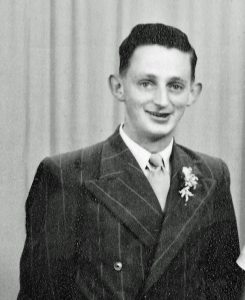 Des Smith at the peak of his hobby with DX. This is from his wedding photo. (added Bill Marsh Jnr)

This profile was scanned from the March 1953 DX Times:

Des Smith didn’t start DXing until February and since then he has amassed a total of 581 broadcast verifications. He has not a record of the exact date of his first verification but his first Americans arrived in August ‘48 and were KSTP KOMA KCBC KPOA KVOO KUSN and KVI. Among his prized possessions now are four South African verifications WENA WENS KBOL WMGA WABJ while a novel reply from CKRM was written in the language of Ye Olde Englysh Town Crier. Naturally he considers an one of the four South African verifications as his “best” especially as they were logged in the main street of-the City of Invercargill…at 144 Dee Street. Before he was married Des lived in South Invercargill which was excellent for Yanks but the present location is good for Europeans only. He has always been interested in radio building and radio in general and did a bit of shortwave DXing  but could not find any pleasure in it. Broadcast, he asserts, is tougher logging but the results more thrilling. His ambition is to verify stations and with 145 in Australia, 15 in Oceania, 24 in Asia, 34 in Europe, 359 in North America, 1 in South America and 5 in  Africa, he seems to be fulfiling his ambition. He uses own built receivers with a flat top antenna 100ft by 20ft running in a westerly direction. Des joined the NZRDXL at the beginning and is an ex-member of the NZDXRA and the NRC. He is 26 years of age, weighs 140lbs, with blue eyes and dark hair, Married, the son being named Bruce Hamilton, while right now is the tine to extend congratulations as Margaret has just presented proud father with Raewyn Elizabeth…so new that she hasn’t any hair or teeth yet! Des served time…. (more to follow)