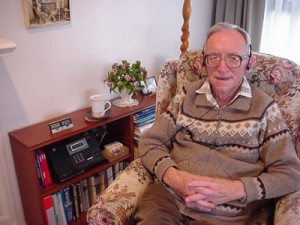 My interest was first kindled when hearing the late Arthur Cushen’s ‘Radio World’ sessions on Radio Rhema. Radio has always held a fascination for me, and being retired the opportunity was there to take it up as a hobby. The next trigger was a sale offer on the part of the local David Reid store (as it was then) for a small Sangean MS 101 short-wave receiver. I fell for it! The accompanying booklet, which listed SW times and frequencies, got me started very much ‘from square one’. Next I wrote to Arthur Cushen for some guidance, as offered on his radio session, and from then on Arthur was most helpful. A discovery that reception was remarkably better if I connected the whip antenna to the TV aerial outlet started me off on a whole series of experiments with antennas.
Having soon realised the limitations of an analogue receiver with only a selection of wave band settings, within six months I invested in a Sangean ATS-803A world band receiver (at another sale!). Meanwhile I had kept the local library busy getting in SW radio books for me through Interloan and was into using “Passport to World Band Radio”. The next logical step was to join the NZ Radio DX League and as well as much help from the “NZ DX Times’ this brought me into contact (by correspondence) with several experienced League
members who have been unstinting in helping me to unravel the mysteries and
practicalities of DXing to this day.

DXing in the Sunset Years

Radio shacks may be just the thing for some, but as a septuagenarian, give me the comfort of fireside DXing! My Sangean ATS-803A receiver fits snugly and unobtrusively into the bookcase beside my fireside chair. Three cordline toggle switches attached to a base enable me to switch quickly between my three aerials. The bookcase not only provides a convenient repository for my PWBR, WRTH, latest NZDXT, log books, UTC clock and the life-giving cup of tea, but also hides the spaghetti like tangle of hook-up wires associated with the switching and the aerial down leads plus earth connection which come in
through the nearby window. A standard lamp gives good light.

Since retiring, my sleeping pattern has become more and more irregular. Thus, it is not unusual for me to be wide-awake at some unearthly hour of the early morning. What better then, especially in winter to be able to switch on the gas heater, brew a cup of tea, and spend the waking moments beside the fire tuning round the dial? Indeed, with everything at arms length, one can relax and enjoy a bit of DXing at any time of the day in any season when the spirit moves and the opportunity presents itself. For this reason my approach to DXing tends to be random rather than according to any carefully scheduled plan.

Another plus, in the interests of domestic harmony, is that when my wife is busy
with her knitting or her crosswords, I can indulge my hobby without turning her into a DX widow!