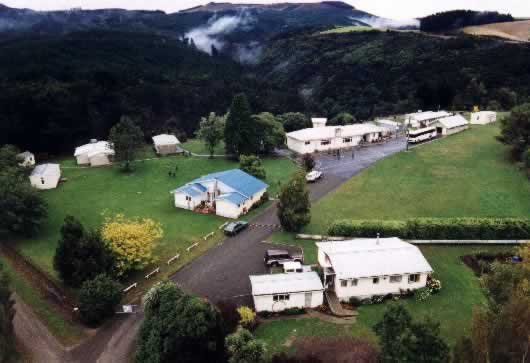 Following on from the success of Conventions at Camp Iona in 1994 and 1998 , the North Otago Branch of the New Zealand Radio DX League hosted another Convention in February 2002.

The Convention took place on Friday the 1st of February and closed on Monday the 4th 2002.

In addition, and at the suggestion of participants in 1998, we had a 3-night DXpedition at the camp on the days preceeding the Convention (29th, 30th and 31st of January). This included regular visits to the nearby Waianakarua DX site.

Some Thoughts From the 2002 Convention

Convention preparations began well before the actual date, months before. In fact I believe they began at the end of the 1998 convention when departing conventionites asked the local group to host another one, such had been their enjoyment and participation of that time.

I’d like to thank the organizing committee, the Herbert/Hampden APW team for the delicious food and indeed all those who participated in any way towards the smooth running of the activities. It mattered not a jot that the bus booked for 9 am on Sunday arrived at 8.45 am on Saturday or that the tour guide thought her tour was to begin at 10.30 am not 9.30 am. The few moments while waiting for her to arrive was filled with the sound of voices – everyone was talking (who was listening!), indeed any free moment was occupied by old friends catching up on four years worth of living, new acquaintances discovering that Aunt Thora was related by marriage to both of them and therefore another elusive piece of the
family jigsaw was able to be slotted into place. I witnessed a joyous reunion between “Mum” (Hazel) Reed and Ray Crawford. Ray knew Hazel was coming, Hazel didn’t expect to see Ray. Other newly acquainted people discovered that they lived not far from each other in the city and had similar interests. I was fascinated watching groups forming and re-forming as old friends were discovered and new friendships forged.

Convention preliminaries began for me before Christmas when Paul Ormandy rang and cautiously enquired as to whether Peter was at home. On being told he wasn’t he said “Oh good”, a strange reply I thought, but what he said next gave me another secret to keep for I already knew that he (Paul) was to receive a life membership to the league. (Paul’s face when he discovered this at the dinner was a real study – I do hope someone recorded that moment). What he had to say sent me to the cupboard where some of Peter’s meticulously kept records were housed. These dated back to the earliest newspaper clippings regarding the formation of the branch here in North Otago in 1952. I just managed to hide the scrap book and some hastily gathered photos in my workbag before Peter returned from his meeting.

He was to be honoured for 50 years of service to the local club and support for its members, at the Sunday dinner being held at the “Star and Garter” restaurant.
Sunday evening prior to the convention saw us meeting with Arthur De Maine and Dorothy who were traveling on south before Arthur came to the camp on Friday. On Tuesday Sandy Clark arrived, Bryan having already checked in to camp for the serious DXing that was to take place over the next three days and nights. Sandy and I had a lot of catching up to do as their previous visit the year before had been unexpectedly cut short.

Thursday morning saw Sandy and I heading for camp to collect Peter and Bryan and drive to Dunedin to meet with Jack Fox and Barry Williams at the Hocken Library to view some of the early DXing material. I was already familiar with this material as it had all been originally sorted and a preliminary cataloguing done in our home. A short stop was made at Palmerston on the way down to enable Peter and Bryan to visit Radio Puketapu operated by Laurence McCaw of Radio Sunshine fame. Our morning visit to the Hocken was followed by lunch at the
Mornington Tavern. Alice Williams joining us for this. Jack was in fine form and regaled us with tales of his early DXing days. The afternoon was spent in visiting as many second-hand bookshops as could be found.

On Friday morning Sandy and I packed our bags, collected my shoes from the repairers, filled her car with petrol, made our lunches, saw to Flash’s (the cat) welfare and headed for camp in eager anticipation. The weather had changed abruptly the night before but was still dry. Even the air at Camp Iona was different, the quietness was noticeable – the only intrusive noise was an occasional car on the gravel road running past the camp. What a pleasure meeting again those whom I had known for years and being introduced to newcomers to our area.

Preliminaries over, the first speaker was Dario Monferini talking about “MW DXing in Europe”. Friday night’s Radio Sprint certainly had the women’s team working hard with one member dialing the frequencies, another using her skills in linguistics to decipher the languages, a third thumbing through a WRTH handbook that happened to have been conveniently left beside the radio (yes I know we weren’t supposed to), and a fourth team member keeping us informed on the cricket score. Peter and I drove into town the meet the 9.30 pm bus from the north and collected Daniel Bloomfield whom we had met at the previous convention and Yuri Muzyka who greeted us with a beaming smile. That smile
never faded during the entire weekend and was still as wide when we waved goodbye on the Monday morning. Could it be that he had enjoyed his time with us so much or was it the anticipation of having a piece of the pavlova that he was carrying so carefully on his knee. A combination of both I suspect.

Two keen members from Australia , Brian and Debra were out early Saturday morning bird watching with the probable sighting of a tui chortling away to itself. Our morning schedule included a visit to Kuriheka, a local estate developed on English lines, the homestead being full of military memorabilia collected by the present owner’s great-grandfather. It was my first visit as the estate had only recently been opened to public viewing, it shows a wonderfully complete record of family life spanning over a century, the interior of the homestead ranging from a Scottish Baronial Hall to a Victorian dining room and Edwardian drawing
room. Back then to camp for a barbeque lunch in the sun. A trip to Moeraki was planned for the afternoon. A number of people went to see the boulders, some stayed at camp to talk and others to catch a few moments sleep.

Adrian Peterson gave an interesting address on his work for AWR later in the afternoon. The auction took place on Saturday after dinner, the auctioneers Stu Forsyth and David Riquish extracting the utmost enjoyment from their task. I headed for bed early to write up my journal while the day’s activities were still fresh in my mind.

Our historic church service was held on Sunday morning straight after breakfast and was attended by twenty-one people who formed an enthusiastic choir to sing hymn no 205 “The church’s one foundation” (some old and dusty copies of the Scottish Psalter and Church Hymnary having been found in the hall cupboard). The service was conducted by Dr Adrian Peterson of AWR who thanked us
all for providing and using Sanitarium products, and the Rev. Dr Frank Glen one of NZ’s noted military historians. The theme being “What God hath wrought”. Adrian quoted from Job and likened the lightning to radio waves, and mentioned that Samuel Morse had transmitted the words ‘ What hath God wrought’ for the first official message sent. Frank used the same text and spoke about our humanity and asked us to remember those who had handed on their love of the hobby to us and asked the question as to whether we were handing on our knowledge in the same fashion. Peter read the Beatitudes from the King James Bible. The service was taped so that a permanent record could be kept.

The bus arrived at 9 am and we all departed for the historic precinct in Oamaru. Helen Stead ably guided us through the town from the grain store area of the nineteenth century, to the penguin colony’s new buildings of 2002 and on to Lookout Point. Back to Tyne St where a short walking tour followed before the group divided, with some choosing to wander round the old area of town and
some re-boarding the bus for a tour past the Basilica, Waitaki Girls’ High School, Waitaki Boys’ High School with Basil Jamieson and Stu Forsyth contributing to the commentary – Basil having both attended the school and taught remedial reading there. Stu had gained teaching practice there while still a relatively new teacher. We next visited St Kevins College, with Ross Gibson who had attended as a boarder from 1945-1949, adding to the commentary at this stage. We arrived back at the historic precinct in time for a short visit to the Criterion Hotel before the official dinner at the “Star and Garter” in Itchen St where a delicious and most attractively served smorgasbord meal awaited us. The official business of the gathering was to present various awards.

Merit awards were given to six people, three of them being Paul Aronsen, Adrian Peterson and David Riquish who were present. A life membership was presented to Paul Ormandy for 15 years service to the DX Times and his contribution to the hobby. A “This is your life” presentation was made to Peter Grenfell. None of the recipients had an inkling of the honours to be bestowed upon them. Paul Ormandy’s first comment on overcoming his astonishment was that “he wasn’t old enough”. We boarded the bus again mid afternoon, a quieter group this time with a number of nodding heads as we returned to camp. Adrian Sainsbury of Radio New Zealand International was the late afternoon speaker. He gave us some very pertinent reasons why SW was still so vital as a communication link, especially in the scattered atolls of the Pacific area.

The after dinner speakers were Frank and Margret Glen. They shared with us their experiences on the Auckland Islands and Campbell Island. What adventurous spirits they both have. Frank spoke about the WW2 Coast Watchers bases on both islands and Margret shared her obvious love of the flora on Campbell Island. I hadn’t realized that the flowers would be so brightly coloured on such a wind swept place.

Supper followed and the real DXers vanished to their listening posts on a last hunt for pirates. Monday morning came all too soon and there were the hugs and farewells and exchanges of addresses and invitations to visit “should any of us be in the cities of Auckland or Christchurch or wherever”. The organizing of last minute travel arrangements were completed and suddenly it was all over. 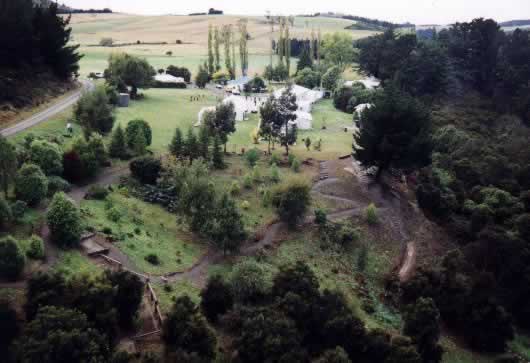 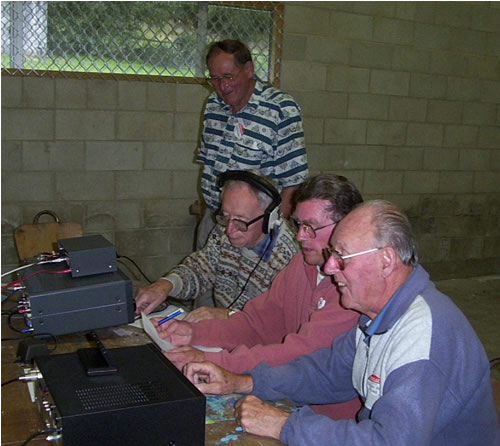 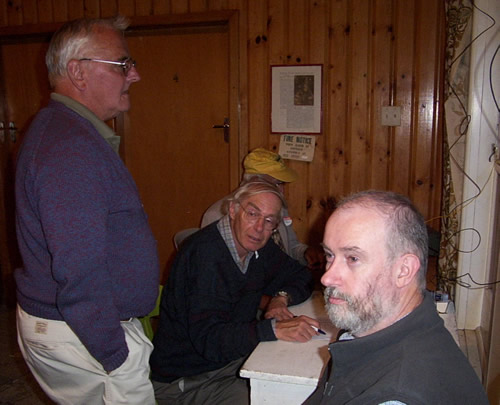 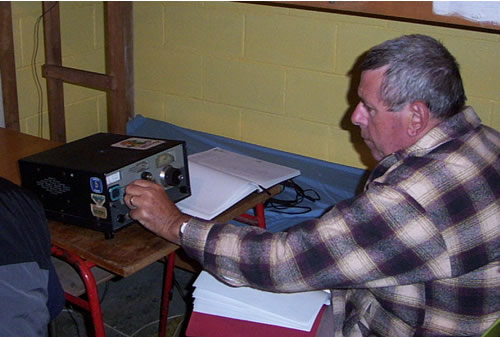 Ray Crawford having a ball on the X-band (Photo credit: David Searle) 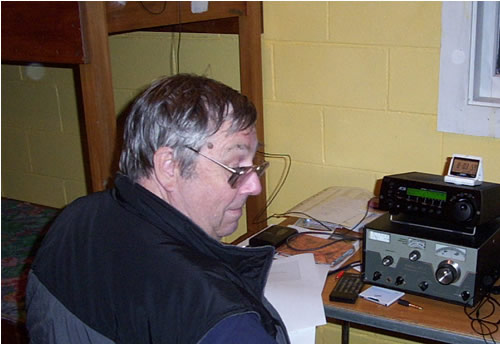 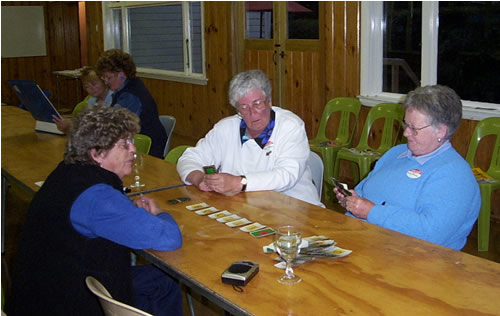 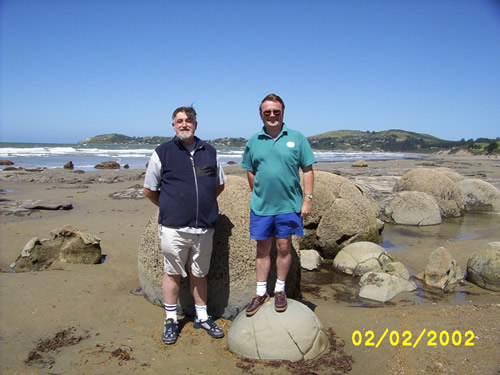 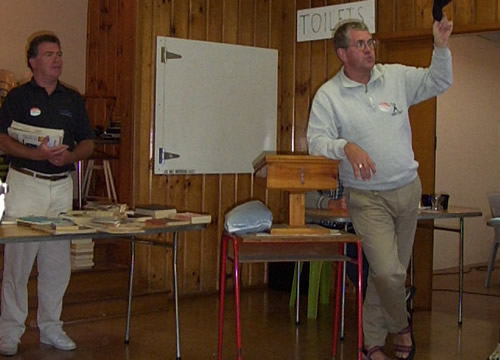