Condensed from a 1941 issue of DX-TRA by Jack Fox

Without a doubt, Shanghai would have the most unusual history of radio stations even though they have long gone. This story gleaned from research of the NZ DX Club’s magazine DX-TRA. The NZ DX Club preceded the NZ Radio DX League. It appeared in 1941 and is worth reprinting today. This article has been condensed from that written by a Wellington DXer, membership No DX55W,under the name of “ Shanghailander”.

Shanghai was a political stewpot pre-war and divided into three parts – the French concession under the French Consul; the International Settlement controlled by a Court of Consuls of various Nationalities and the Chinese area. Part of the international settlement was run by the Japanese army and was known as Little Tokyo. There was also the Badlands an area run by gangsters and corrupt authorities.

There were more radio stations in this city of 5 million than there were in most
countries. There were roughly 40 stations. Two of the best were the American
stations XMI-IA which also operated on shortwave, and XMI-IC. The English had XGDN on 11760; the Germans had XGRS also on 11 megs; the Italians, XIRS, and the most powerful was the French station FFZ on 12050. The White Russians and the Portuguese were also represented on the air. The rest of the broadcasters were Chinese. 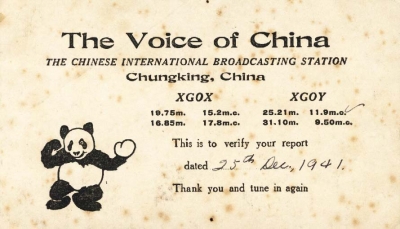 In the very early 30s the Chinese Government and foreign powers could not agree on the sovereignty of the air waves and consequently went their own way creating a real muddle on the broadcast band. Things changed when an American cabaret owner opened a station with the call “ RUOK  The Chinese authorities and the foreign powers came to an agreement, RUOK was closed down and all stations were allocated “ X “ call signs and came under Chinese control.

Most stations programming was from recordings although some Chinese stations used live artists, being cheaper. Life for a Shanghai foreign radio announcer was never dull. One man who everyone in Shanghai who everyone listened to, and either applauded or cursed, was American, Carrol Alcott who went around in a bullet proof vest and ﬁve bodyguards. Three times each day he commented over XMHA on the political situation, and the excellence of Maxwell House and UB draught beer. His outspoken adherence to Democracy and the Chinese cause earned him the combined  hatred of the Germans, Italians, Japanese and Chinese Puppets. 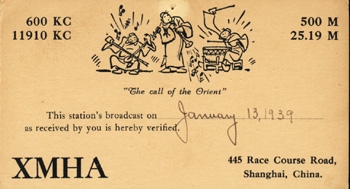 Different warring factions took on jamming programmes and even the small missionary station XMI-ID was jammed for no reason. XMHA authorities traced the interference to a Japanese warship tied up in the river. Retaliation with the jamming of the two Japanese stations was threatened, and a brief statement made to the affect, that they had enough power to interfere seriously with shortwave broadcasting in Japan itself. The jamming ceased.

In the early 40s, the city of Shanghai was a bustling international centre where many nationalities were engaged in commerce and consequently, there were various radio stations. I reported the French station in November 1940 on 12050 kcs with 400 Watts. It had the distinction of having a French call sign FFZ. I was lucky to get it veriﬁed. The Americans had their own station on 11870 with the call XMHA. The British were represented with a station XGDN on 11760 kcs. Another in my log hook was XMTA 12215 kcs which I believe was a German operated station. The Chinese had XDJB with 10 kW on 900 kcs. After the war I logged XMTA on 12215 kcs but have no record as to what nationality it was.

Today these long gone stations are all but a memory.
Jack Fox