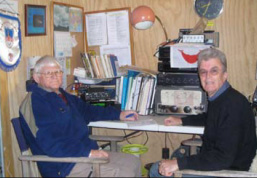 It was a privilege to host our esteemed Patron Frank Glen and his good wife Margret for a relaxing stay at Mangawhai-by-the-Sea in Northland in mid-June.

For me, living in a relatively isolated country area, any opportunity to DX with a fellow enthusiast is a bonus. With the Glen’s visit coinciding with the Winter Solstice and the shortest day of the year, it was also a chance to see how early we could hear distant low frequency stations that rely on a darkness path to propagate. There was also the opportunity to get to know Frank better as, whilst he has been a DXer for some 60 years, our paths did not crossed until recent years.

And get to know this most interesting of DXers I did – of his growing up in Invercargill, taking on an electrical apprenticeship, his time as padre and priest to workers on the Manapouri Power Scheme, flying missionary work covering thousands of square miles of inland Australia, serving with Australian Forces in Asia, the return to NZ and time as a Probation Officer, Parish Minister, Lifestyle Farmer. And I discovered common interests in booking collecting, philately, military history, and much more.

Frank has written 3 books about their interesting life, as well as academic treatises on church and Australian military history including a soon to be published book on Australian involvement in the NZ (Maori) Wars of the 19 th Century. As you might imagine, our conversations ranged far and wide!

But when we weren’t talking, we did check the radio dial and fortunately conditions were better than average, with Latin American stations (a lot of them unidentified) on almost every medium wave frequency, and good morning and evening African and Latin signals in the tropical bands. It was good to hear Frank’s comparisons with his regular DX listening sessions at Tiwai.