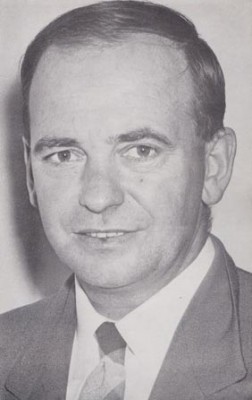 The June to August 1962 edition of the ”The Southland DX Digest” conveys the following:

Lloyd Warburton has passed on. DX was his main hobby until the love of high mountains superseded it. Lloyd began DXing in May 1938 and before the war was the leading member DXing in the city area (Invercargill). Besides being a foundation member and first National President of the NZRDXL, his executive posts included president and competition judge of the branch, competition editor of “The Times”, and in the early days, secretary of the Southland Branch of the NZ DX Radio Association. Lloyd was a chap with unbounding energy, a forthright debater at meetings, a fine DXer and a valued friend. At the July meeting members stood in silent tribute to one who made a very notable contribution to our DX hobby. The branch’s sympathy was extended to Mrs Warburton and family.

The following profile was scanned fom the February 1952 DX Times:

Our first president: LLOYD E. WARBURTON, 497 Tweed Street, Invercargill was the first president of the NZRDXL. In former times he has been president of the Southland  Branch of the NZDXC and secretary of the Southland Branch of the NZDXRA. He is competitions editor on the magazine staff and chairman of the competitions committee of the Southland  branch of the League. He is also a member of the Newark News Radio Club. Lloyd has always been interested in radios and recollects hearing 2GB many years ago on a 2-v battery set, He started DXing in May 1958 with a Philips 8-v 1938 model. He now uses a 9-v 1946 model Philips transformed into a super-looking, crystal-controlled, rebuilt model. His verified bc log is 418 with 182 on short wave but this should be augmented considerably one of these days as Lloyd is building a bach at The Riverton Rocks. Lloyd’s first good verification was WIP 1kw in Philadelphia heard in 1939 and others include Zagreb CMGY JOPK WVTQ(1180 transmitter, a_N.Z, singleton) and WBYS. His most interesting verification is one from Breslau radio when a page of the then German Wireless Weekly was devoted to his reception and his report “Placed proudly under glass in the Breslau station as a token of the great wonder wireless”. His first verification was from 2NR Grafton on April 14, 1938. In every-day life Lloyd is managing-director of G. Warburton, Ltd., the largest firm of watchmakers an manufacturing jewellers in Invercargill. He is 32 years of age, 5ft 3in and weighs 140lb. He is the proud daddy of Margaret just started school and Glenys one year old this month. He ruefully confesses to many other interests besides DX and business. Until he had a serious head illness last year he played cricket, soocer,and was an active and executive member of the Southland section of the NZ. Alpine Club, He takes his gardening seriously and his grounds are beautifully laid out, mainly with N.Z. Plants, while he has a rose garden and alpine rockery. He is also in the RNZAF reserve having spent 5 and a half years as a sergeant in the Instrument Repair Section in N.Z. and Fiji. Lloyd is new feeling fit once more and Saturday afternoon sees him again on the cricket field.