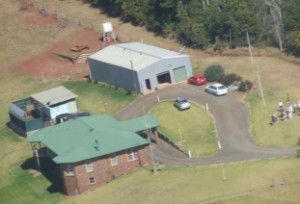 Our host was John Bastable and we were gathered from both sides of the Tasman. Ray & Raewyn Crawford, Cris & Lynne Martin, Colleen & John Smith, Doug & May Milligan, Martin & Ann Hadlow, Arthur & Dorothy de Maine, (also doing the Queensland railways circuit) Jeff & Di Hosking and Frank & Margret Glen (Margret was in Australia for a floral Art Exhibition) made up the weekend.

We all gathered for a mid-day dinner at John Bastable’s favourite watering hole know as the Captains Paddock Winery for a Saturday lunch where he made a speech of welcome to the Kiwis and Frank Glen replied on behalf of and including the NZRDXL.

The DXpedition was well provided with radios from by the generous offer of John Smith who came with enough receivers to cope with those travellers who came without one. The receivers represented were an impressive group. Drake RA8, AR7030, Drake SW8 World Band, IC R72, Sangean ATS 805A, Palstar R30 and an AR7030 Plus. Your writer used the Palstar and found it both simple to use and although small in size was clearly a leader in pulling in the signals.

The larger of the two standard EWE aerial was erected on the late afternoon of arrival and one could hardly see the table or radios for connection boxes, power points and plugs of every description. Among the smart equipment used were the Mains Plessey splitter box and noise eliminators. The NES 10-2 with speaker and the NEIM1030 in line model. Smithy operated a dandy ICF Sony P28 recorder, something that has to be seen to be believed.

John Bastable used the occasion to have a collective gathering of knowledgeable people who were able to assist him in the non listening period of the two days to install three different sized satellite dishes. These were 35cm, 2.3 metres and 65 cm. These satellites will enable John to receive hundreds of TV signals from all over the world and we were able to have a glimpse of those of these following installation.

There is little point in including the DX trail in this report because of the time lag in publication but it is worth mentioning on the Broadcast band on 909 China has a strong signal and a call ‘Radio Matakana’ on 1670 could not be identified. Generally it was not an exceptional DXpedition, but one that drew for this reporter five broadcast reports that would not have been attainable in New Zealand because local stations are astride those frequencies.

The DXpedition folded its EWE on the Sunday afternoon when one of the members flew his Piper 180 over out site and took an aerial photo of the gathered assembly. We were all grateful for John’s hospitality and without doubt a fine time and a good time was had by all.