From the March 1966 DX Times – thanks to Dene Lynneberg

Perfect weather in the Capital City (hottest February days for 6 year) greeted members as they gathered for the 10th National Convention. DXers, seeking to make or renew acquaintances with others in the DX fraternity, travelled from Hamilton, New Plymouth, Stratford, Nelson, Oamaru and Invercargill (wot, no Chch?) for Convention’66 and for the first time a League Convention went international with Brian Lane especially from Sydney.

After a roll call, lengthy sessions of handshaking and distribution of “Hello, my name is Joe Bloggs” stickers, at the Wellington Railway Station, conventioneers proceeded to the nearby home of the N.Z.B.C – Broadcasting House. En route, we passed the country’s chief gas supply (wot, no beehive?) and then commenced our inspection of 2YA, 2YB, 2YC, 2ZB, 2YD and Radio New Zealand. A competent technician ushered us through a maze of corridors, answering as he did so the queries of members.  Following a brief delay while some members logged cricket scores “live” from National Sports Roundup, we squeezed into the Radio New Zealand studio to the accompaniment of a bellbird. While Dallas McKenzie proudly identified the utterances of Rome Radio’s interval signal, Dick Pollard was outlining his plans to “remove” five broadcast stations, as the N.Z.B.C.’s contribution to a good night’s DX. He was, however, persuaded to comply with the Partial Nuclear Test Ban Treaty and no such “blow” occurred. Then, after some members had cooled off in the air-conditioning plant, we embussed for the site of Convention ’66.

About 5 p.m. the chartered Convention bus arrived at Reikorangi, about 35 miles north of Wellington, where a Presbyterian Bible Class had been converted into a group of DX shacks. Already on hand were a group of local members, who had spent Friday and Saturday preparing the site. Thousands of feet of aerial wire (thank you, taxpayers) had been strung across the fields – not without mishap – a cow trod on one during erection – and the seven DX shacks had been aptly named.  Following the evening meal, members quickly made themselves familiar with the receivers to which they had been allocated.

And so to DX. By 7 p.m the first Yanks were firmly established, and though reception was not quite up to expectations, several members stated it was a distinct improvement in conditions over Leithfield in 1964. Following its reception at the last convention, KPUB came on the air especially for Convention ’66, a fact which was verified by a phone call direct to the station earlier in the evening. Some DXers may have heard it just after it signed off at 8 p.m. This was only one of the many specials arranged for Convention ’66. 2AP, VQ0, 9PA and KFI were other BCB stations who made special arrangements for the gathering. Shortwave too was well catered for. Several of the ABC New Guinea stations were heard as well as Prague, Montreal and WRUL. A phone call from WRUL was unfortunately “lost” at Auckland. Radio South Africa’s engineers made special attempts to reach N.Z. by a long path route, but their efforts were in vain, although some African signals were heard on 60 metres on Sunday morning. The broadcast band produced several European loggings about this time also. 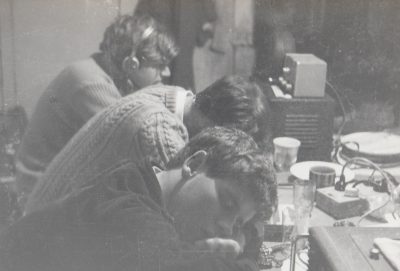 Foreground: Dene Lynneberg catching up on some sleep

Breakfast came all too early for some who DXed all night. Awards for the most loggings went to Ray Goldie and Betty Brown. The Reikorangi (egg) cup was won by the Taranaki contingent, but no one could identify Barry Gifford-Moore’s mystery interval signal as Radio Veronica, the Dutch pirate. Following taped greetings from August Balbi and the Australian DX Club, farewells were said and group photos taken by an endless stream of photographers. About 10 a.m., conventioneers departed for Wellington and home.

Perhaps some may have heard 2ZB’s brief but informative Convention report on Monday, 14th February, in which former N.Z.B.C. announcer Phil Sherry greeted us from Holland. We also rated a mention on  a 9 p.m. N.Z.B.C news bulletin. Combined with a well-presented window display in a city shop, these have helped to make the League better known in the Wellington district.

Thus ended Convention ’66 – the League’s tenth, Wellington-Hutt branch’s first. Your hosts wish to thank all the League members who traveled from far and near, and who helped make the gathering a success. We enjoyed having you all, and we sincerely hope to meet you all again next time. Signed – Bryan Clark, Convener