Posted on March 3, 2015 by Paul Ormandy | Comments Off on German Domestic SW Graces Our Dials 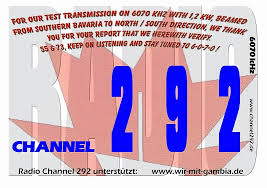 When the ‘Deutsche Welle’ decided to close down one of their 500 KW shortwave broadcast transmitters near Munich at the end of 2012, a group of German radio amateurs applied for and were allocated the then available short wave frequency of 6070 KHz in 2013.

This group now have an operational 10KW station on the frequency, using the
driver stages from the old Deutsche Welle transmitter. The rest of the
transmitter was built by and is run by Rainer DB8QC .

Another Rainer DF2NU who is one of the group running the station and the
president of the Munich South section of the DARC, hopes to be able to
broadcast more often once sufficient content is available however they are
already seeing other broadcasters such as Radio China moving onto the
frequency in the evenings as those stations perceive 6070 KHz as a free
frequency.

And it has already been heard in NZ. From Bryan Clark :I was trying to identify something on 6070 from 0700 UTC. I finally struck gold with the attached audio on 16 February – was an odd feeling as if my radio had gone back in time more than 30 years! The Channel 292 website shows that they air old radio stations most days but the past few days the Canadian has dominated the frequency!