Posted on July 24, 2014 by Paul Ormandy | Comments Off on Modified Views On Shortwave Propagation 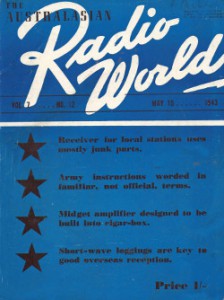 TWO abstracts from technical papers of German origin which have recently appeared in “Wireless Engineer” deal with matters of particular interest to those engaged in short-wave work.

The first of these is from a paper by B. Beckmann, W. Menzel and F. Vilbig, and gives details of a particular form of “scattering” in the ionosphere, which results in strong signals being obtained within the skip distance of a transmitter.

As is generally well known, there is, for any particular point on the earth’s surface not too far distant from a short-wave transmitter, a certain frequency which, with a given state of ionisation in the ionosphere refracting layer, is the highest point that is returned to earth at that point. Waves of higher frequency than this, going up at the same angle, will penetrate the refracting layer, while waves of lower frequency will be receivable at the point in question and also at points nearer the transmitter. Similarly, when the ionisation in the layer is steadily increasing or decreasing, there comes a time for any particular frequency to be the highest which is returned to earth at the given point. At this time all points nearer to the transmitter lie within the “skip distance” for that frequency, and refracted waves are not receivable at them.

Within the skip distance, and beyond the limits of the ground wave, signals of a kind are, however, normally obtainable, but they are of a generally weak and unsteady nature. These are due to the fact that, during the upward passage of the wave towards the F layer, it passes through the E layer, and here a portion of the energy in the wave is “scattered” by ionic clouds which nearly always exist in the lower layer. Some of this “scattered” energy is sent downwards so as to reach the earth within the skip distance for the refracted wave. It must be stressed, however, that this normal type of scattering provides only weak signals, which are not to be compared with those due to a refracted wave.

According to the abstract the German workers carried out their observations at Munich and found that, after that place came within the skip distance for the London 25 – m. wave, the London 19 – m. wave “could almost always be heard at great strength.” Of course, Munich would fall within the skip distance for a London 19 – m. wave before doing so for a London 25 – m. wave. Secondly, the 19 – m. transmission of Zeesen, for which Munich was within the skip distance for the whole of the observing period, was frequently audible at very great strength, and on these occasions its signals did not, in fact, show any effect of “skipping”. These strong signals could not have been due to the normal scattered radiation, and they are explained by the authors as follows: When, after the ionisation in the F layer has fallen below the limit necessary to return the wave to earth at the point in question, the transmission still is not interrupted, because the refracted rays are replaced by other rays which are deflected by the ionic clouds in the E layer on their upward journey, so that they fall more obliquely on the F layer than those going by a direct path. Under these conditions they are refracted by the F layer, and, reaching the E layer, are again deflected, this time downwards the earth.

The E region clouds do not act with the F layer to bring about this result on all occasions, for sometimes there is only the normal weak reception, which is due to the scattering from the E layer clouds acting by themselves. But, the German workers state, the strong reception was obtained during 50 per cent, of the observations, and if this is so it would appear that it should be taken account of’ in the planning of short-wave communication services to point not greatly distant.

Workers other than the Germans have also observed the fact that, at these distances, strong reception on frequencies which should normally skip is often obtainable, but whether it is due to some other effect in the E layer is not yet definitely known.

The other matter of interest to short-wave workers is from a paper by C. Leithauser dealing with, among other things, the behaviour of the F2 layer. According to the abstract, the author of the paper is not satisfied with the generally accepted theories seeking to account for the daily and seasonal variations in the F2 layer critical frequency, and on this point he will, no doubt, find many to agree with him. Certainly, when it comes to practice, there do seem to be some points which still require explanation, more particularly the matter of the low working frequencies which – if the measured critical frequencies are correct – should obtain during the summer day. Practical results show that these can often be considerably exceeded.

The German writer bases his ideas on the fact that when a wave penetrates into the layer it becomes subject to a type of attenuation which increases with increasing frequency. Under certain conditions, he states, when the critical frequency measurements are made, what is obtained is not the point of maximum electron concentration but a point from where, as the electron concentration increases, the attenuation rises with increasing frequency. This means that the point of maximum electron concentration lies higher than the point to which the wave of critical frequency reaches, and that higher frequencies fail to return, not because they penetrate the layer, but because they are completely attenuated. Thus the critical frequencies recorded for the summer day are too low, and this fact may give rise to all sorts of errors when the vertical incidence measurements are applied to the oblique case, as they are in the practical forecasting of working frequencies. Furthermore, according to the author, the error in the measured critical frequency is not confined exclusively to the summer day.

One would have thought, however, that it would have been relatively easy to determine whether the measured critical frequency was, in fact, due to the point of maximum electron concentration having been reached, or whether on the other hand, it was due to attenuation of the wave with rising frequency. For example, does the virtual height increase very rapidly at frequencies near the critical frequency? If it does not, the implication would appear to be that point of maximum electron concentration does lie higher in the layer, and that waves of frequency greater than the critical would, if they did not fail to return because of being attenuated, show increased virtual heights. If, however, the curve of virtual height against frequency is rising almost vertically near the critical frequency, one would infer that the point of maximum electron concentration is being reached, and that the failure of higher frequencies to return is due to penetration of the layer.

On the whole – so far as the abstract goes – one would conclude that, in that part of the paper which deals with F2 layer behaviour, Leithauser has not quite proved his point, and that, to account for the anomalies previously mentioned, further work is necessary.