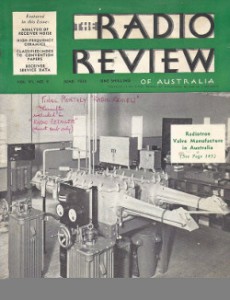 From the Radio Review of Australia (June 1938)

EVERY reader of this journal must have encountered at least one reference to the vagaries of the ionosphere” in the course of his reading, and he is also bound to have come across references to ‘sun-spots” and their effect on terrestrial conditions. It is quite possible that these references, usually of the incomplete newspaper” variety, have left him wondering what it is all about. The following article, which is by a scientist of the Carnegie Institution, Washington, U.S.A., sums up present knowledge of the ionosphere, sun-spots, and their relation to radio transmission, very neatly and will give the reader a much more intelligent appreciation of what is happening next time he hears of a ‘solar hydrogen eruption” or a “sun-spot cycle.

WHEN Marconi first succeeded in transmitting a radio signal across the Atlantic he performed a miracle, because the feat was in contradiction of the then-known principles of nature. It had been thought previously that radio waves transmitted from a point would not follow the curvature of the earth but would fly off into space like mud from a wagon wheel.

Reception of the signals on the other side of the Atlantic indicated clearly that the signals were reflected back to earth by an electrified condition of the upper atmosphere. A definite experimental demonstration of this electrical mirror was not accomplished, however, until 1925, when Breit and Tuve, of Carnegie Institution (U.S.A.) and Professor Appleton, in England, succeeded in obtaining direct reflections of radio waves from the upper atmosphere.

The ability of these layers to reflect radio waves depends upon the number of electrified particles present, either electrons or electrified air-molecules called ions. If the number of electrons per cubic inch in a layer is 1,000,000, a 130-metre radio wave, if going straight up, will be reflected by the layer. Still shorter waves will either pass through that layer and he reflected by a higher layer or else pass off into space.

In actual transmission of radio signals between stations the waves that are received do not go straight up, but encounter the deflecting layer obliquely.

Under such conditions, waves of approximately three times the wave-length may be reflected, just as a much better reflection is obtained from a piece of glass when looking at it obliquely. Since ions are much more massive than electrons. and consequently are harder to set into motion, about 30,000 ions are required to give the same effect as one electron.

These conditions apply only in the uppermost portions of the ionosphere where the electrons (or ions) have enough room to move freely to the rhythm of the radio waves without colliding too frequently with unelectrified air-molecules. At lower heights where the atmosphere is crowded by air-molecules, frequent collisions of the electrons cause them to waste the energy given by the radio waves instead of reflecting it back to earth. Ordinarily the number of elections at such heights is too small to affect the radio waves used for commercial long-distance communication. These waves pass through the low-lying ion-banks and are reflected by higher layers. The wave-lengths assigned for broadcast transmissions are absorbed by these low-lying ion-banks during the daytime, which accounts for inability to receive ordinary broadcasts over long distances during daylight hours.

A considerable advancement of our understanding of the electrical processes of the ionosphere has resulted from a recent discovery, announced by Dr. J. H, Dellinger, of the National Bureau of Standards (U.S.A.) This new effect consists of a sudden fade-out of high-frequency radio signals on the daylight side of the earth, lasting at times from a few minutes to over an hour. During these fade-outs, long-distance communication on any short wavelength is impossible. Ships at sea, aeroplanes in flight, commercial and amateur stations – all find short wave communication impossible during the interval if the path of the radio waves involves reflection from the ionosphere.

During the past year about 100 such cases have been reported. About half of these cases occurred at times when bright flares of hydrogen light were visible on the sun. It is believed that all of these fade-outs occur simultaneously with solar eruptions – absence of solar observations sometimes accounting for the failure of any astronomer to report observation of a flare. The most intense manifestations were accompanied by sudden changes in the earth’s magnetism and in the natural electric currents flowing in the earth’s crust. Like the radio effects, the electric and magnetic effects are perceptible only on the daylight side of the earth.

Never before has a direct correspondence between solar and terrestrial phenomena been observed and proved. One of the most pronounced fade-outs occurred on April 8, 1936. At 11.45 a.m. U.S. Eastern Standard Time, a sudden brightening was observed in the region around a spot on the sun. One minute later radio reflections from the ionosphere ceased and a large change occurred in the earth’s magnetism and in the earth-currents.

Special observations of the electrical state of the earth’s outer atmosphere being made at the Carnegie Institution’s observatories at Huancayo, Peru, and Watheroo, Western Australia, and by other organisations elsewhere, serve to indicate the nature of the effects. At these observatories short pulses of radio waves are sent up into the ionosphere ten times a second. The reflections of these pulses are received and, by measuring the time required for them to come back, the height of the reflecting region is determined, in very much the same manner as the distance of a cliff can be determined by the time required for an echo to be returned from it. Since short waves require greater numbers of electrons to reflect them, the number of electrons at each height from which reflections are returned is determined by decreasing the wavelength until the waves just penetrate the region and are reflected from the next higher layer or are not reflected at all but escape into space.

When a fade-out occurs, no reflections can be obtained from the E, F1 or F2 layers, just as if one were looking into a looking-glass and suddenly ceased to see his reflection. The only way such a thing can happen is for the looking glass to be broken or an opaque object to be interposed in the line of vision. The second explanation is the only tenable one, and the opaque object in this case is a cloud of electrons or ions at low heights where numerous air-molecules interfere with their free motions and cause them to waste the energy of the radio waves in random collisions. Perhaps this “cloud” should be thought of as a blanket covering the entire daylight hemisphere of the earth at a height of from 40 to 60 miles.

It is known that the ordinary ionization of the E- and F1-layers is caused by ultra-violet light from the sun. The ultraviolet light, like all light radiation, is identical in nature with radio waves, only the wave-length is over one thousand million times as short as the shortest regular broadcast waves – there are two hundred and fifty thousand light-waves to the inch. Striking the molecules of air, these radiations disrupt the molecules and set electrons free in very much the same way as they are set free in a photoelectric cell.

Since the opaque layer which causes radio fade-outs occurs vey suddenly and at low heights, the ultra-violet light causing it must be much more intense than the ordinary ultra-violet light from the sun. All this light originates in the solar flares which are visibly manifested as luminous masses consisting principally of hydrogen gas thrown high above the surface of the sun.

These sporadic increases in ultraviolet light are not the only changes which occur in the ionizing power of the sun. The number of spots upon the sun varies with an 11-year cycle. Although the visible light from the sun does not undergo any appreciable variation during this cycle, the changes in ionizing radiation are tremendous with a resultant effect on terrestrial magnetism.

Increases of ionizing radiation cause increases in the number of electrons in the layers which in turn permit the reflection of shorter radio waves. Consequently, during times of numerous sunspots, long-distance transmission on much shorter wave-length (much higher frequency) is possible. A few years ago, which was a time of sunspot minimum, trans-Atlantic communication on 20 megacycles – 15 metres wave-length – was not reliable, but during the past winter, owing to an increase in the spottedness of the sun, trans-Atlantic communication on 45 megacycles – less than seven metres wave-length – has been reported. Since the maximum of the sunspot-cycle seems to be approaching, it may be possible during the next few years to accomplish trans-Atlantic communication on unprecedently short waves.

Wave-lengths had been assigned to certain stations for short-distance communication during the sunspot minimum. With the enhanced quality of ionosphere as a reflector of short waves, these signals have been frequently heard across the Atlantic.

This improved quality of the ionosphere during times of sunspot activity makes a greater range of wave-lengths available for long-distance transmission, but it is not without its drawbacks. Times of maximum sunspots are most favourable for occurrence of magnetic storms – violent disturbances of the earth’s magnetism lasting for a day or several days. These storms are believed to be due to swarms of ions and neutral corpuscles ejected from the sun with such speed that they reach the earth in about a day. Impinging on the atmosphere these corpuscles give rise to auroral displays in high latitudes and seriously impair radio communication when the path of the radio waves passes close to the auroral zone – a region about 20 degrees from the geomagnetic pole.

Most of the radio traffic between the United States and Europe traverses such a path, with the result that on days of great magnetic disturbances those radio circuits are not available for commercial use at any time. Even on days of moderate disturbances these circuits are rarely available 100 per cent, of the time, while on days which are free from disturbance, transmission is usually satisfactory 24 hours of the day. On the other hand, radio traffic between this country and points in South America is not seriously impaired by magnetic disturbance. Ingenious application of this fact was made by one of the commercial companies during the severe magnetic disturbance from April 24 to 28, 1937. Radio messages intended for European points were routed through the company’s station in South America and re-transmitted to Europe, with the result that communication was maintained throughout the disturbance.

Another interesting application of scientific knowledge concerns the scheduling of trans-Atlantic broadcast programmes. Lengthy studies have shown that times of magnetic disturbance tend to recur at 27-day intervals, owing, presumably, to the rotation of spots on the sun. On this basis it is possible to predict a month or two in advance which days are likely to be unsatisfactory for long-distance transmission, and which days are likely to be satisfactory. International broadcasts, scheduled for pick-up by one of the large networks, are arranged as far as possible to come when no magnetic storms are expected.