Where to point your Antenna Part 1

An article by Bill Marsh

Where to Point your Antenna Part2

Most seasoned DXers will be familiar with what is written below and I look forward to comments and any corrections. The article is primarily aimed at past members coming back to the hobby and to new members joining our fraternity.

When we all arrived at the NZRDXL convention 2018 in Mangawhai this year, one of the first tasks was to erect aerials. A lot of fun and bantering took place as to which direction to point the EWE antennas for North and South American DX. There was almost as many interpretations as there were DXers. The aerials were first erected in one direction and then finally where they should be pointed. I had not been to a convention in 50 years and surprised to learn that my estimate of 5 degrees between “True North and Magnetic North” was way off the mark and now averages 22 degrees here in New Zealand. The advent of using “compass apps” on mobile phones added to the confusion. Users need to be aware that most “compass apps” point to “Magnetic North” and only a few (generally GPS guided) allow you to select “True North”. I favour an old fashion compass to avoid mistakes. 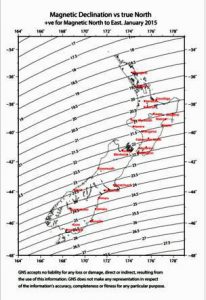 From this map it can be seen to be 19 degrees near the top of the North Island, 22.5 degrees in Central New Zealand and 25 degrees at bottom of South Island. i.e. a 6 degree variation. For those using a EWE antenna a few degrees either side of the favoured direction will not matter too much as the EWE is fairly broad in the favoured direction and signal loss will be less than 1 or 2 db, and inaudible to the human ear. If however you are using a 500m (1500 ft) “Terminated Beverage” antenna as an example, then closer attention to direction will be required as such an aerial is extremely directional.

Below are some “Bearing Maps” for 3 locations of New Zealand. Again you will notice that a few degrees either side of your favoured direction won’t make too much difference. Special thanks to Peter Mott for the source of these maps. 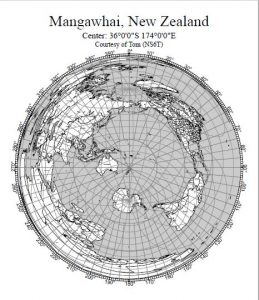 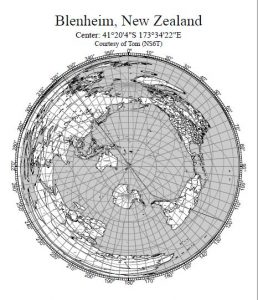 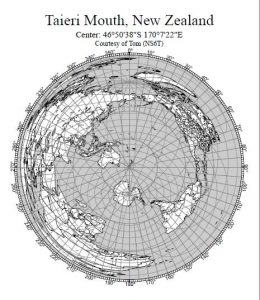 This entry was posted in Antennas. Bookmark the permalink.