A Perception Of Sunspots From 1939

From the December 1939 issue of

“Lone Star’ Christchurch, has in past years discoursed in “TUNE IN” on this subject. We were told that according to scientists 1934 would be a peak year. From 1935 reception conditions would gradually decline to the 1928 level. We think those DXers who can recall DX of 7 years ago will probab1y be inclined to agree with that prophecy. Certain is it that numerous stations heard in past seasons have slipped badly since 1935. Think of 1935 when KFI KSL WBTT WHO KVOO WOAI KMOX used nightly to roar through. We recall reports of Europeans heard at breakfast time “midday” Americans and such feats. But let us see. Can we hope for better days? Yes, thinks “Lone Star”. (We quote from an early article.) “Scientific research has given us some data… 1905, 19l7 and 1928 were years of maximum so1ar activity, and we know that these days because of intense ultra violet rays brought hot summers and drought in many places. 1928 was abnorma11y poor for DX but 1920 and in 1923 some remarkable DX was achieved. This was an ebb year as was 1934. (“TUNE IN” conducted an inquiry to find o1dest veri from overseas, It was KFI dated September 1923. ED.) The next DX season will according to this theory peak in about 1945. How many present day DXers will experience it?” 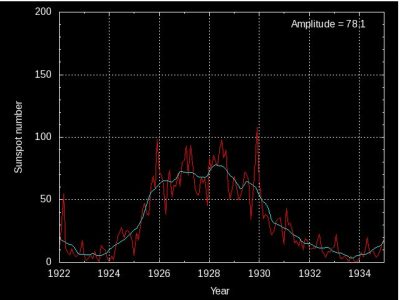 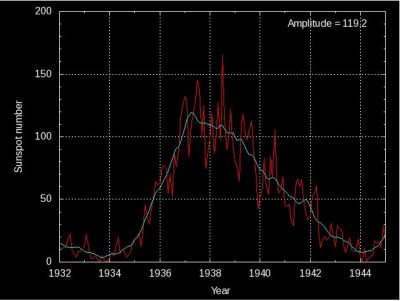 (Sunspots are dark spots on sun’s surface and these are stated to vary over a period of 10 to 11 years. Maybe wire on the up grade! ED.)