Sunspots And Reception In 1939 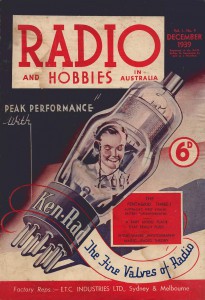 The apparent effect which “sun-spots” have on radio reception makes their study of special interest to the radio engineer. This article was submitted to Radio and Hobbies by a reader in England, and gives some interesting information on a special subject. 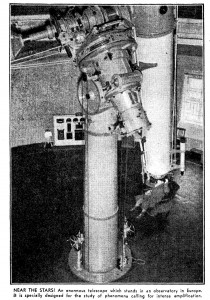 SUNSPOTS are one indication of high solar activity, which is, however, also indicated by other phenomena. The most important of these are the clouds of hydrogen and of calcium vapour – called hydrogen or calcium flocculi – which appear on the sun’s surface, having been erupted from its interior, usually in the vicinity of sunspots.

All these phenomena vary in a relatively – though not perfectly – regular manner over a period of 11.1 years, and hence the sun exhibits a cycle of activity of that duration. More strictly we should speak of it as a 22.2 year cycle, because certain of the phenomena exhibit opposite characteristics in alternate cycles, only returning to their original form after two complete 11.1 year cycles have passed.

But, as far as short-wave propagation is concerned, it will be sufficient to consider the degree of activity only, and this reaches its maximum and its minimum, generally speaking, every 5 ½ years. The peak of the present cycle occurred in 1937, so that the activity is now definitely decreasing. We shall notice the effect of this more and more during the next few years, and as far as short-wave communication is concerned, it will mean that lower and lower frequencies will have to be used in order to maintain reception. In broadcasting, for example, it is unlikely that the 21 Mc/s band will be of much use after next winter, while 6 and 9 Mc/s – and possibly lower – frequencies will be extensively used.

In looking for the reasons for this effect, we must first of all consider the Ionosphere layers by which the short waves are propagated.

The most important of the layers of ionised air which lay in that region are the F layer at a height of 180 miles and the F. layer at a height of 60 miles. The ionisation of the air in the layers is due mainly to a wave radiation from the sun, i.e., to ultra-violet light. Short waves are propagated over long distances by refraction, which usually occurs at the F or upper layer, where the degree of ionisation is highest. Sometimes, however, it occurs at the E. layer, when that layer is particularly highly ionised. The higher the frequency in use the greater is the ionisation required to refract the wave back to earth. Conversely, the less the ionisation of the layer the lower will be the highest frequency it is capable of refracting. Thus the E. layer does not usually refract these waves because its ionisation level is too low, and so they penetrate it and are refracted by the F.

Thus the best frequency to use for long-distance communication is the highest that is refracted by the F layer, because this will also be least attenuated by the E.

Keeping in mind these principles, let us now return to the consideration of the effect of solar activity upon shortwave propagation.

The layers are produced by solar radiation, and the amount of this radiation increases with high solar activity. The sunspots – and other evidences of solar activity – follow a more or less regular cycle, reaching Its maximum every 11.1 years. So we should expect the ionisation of the layers to follow a cycle whose peak coincided with that of the solar cycle, and that is what, in fact, does occur.

If there were no E layer, we should expect the higher ionisation of the F to produce better propagation conditions at the maximum period, for then the upper limiting frequency for refraction would be much higher than at the minimum, and all frequencies below this would be well propagated. During the night the E layer ionisation falls very low owing to recombination of the ions and electrons, and then this condition does exist. But the presence of the E layer during the day causes high attenuation of frequencies below a certain value, and we must remember that the upper frequency limit for this attenuation is also enhanced by the high solar activity.

Still it is quite true to say that at the maximum of the solar cycle, good short-wave conditions do prevail, and that the presence of sunspots denotes – in general – good short-wave conditions. For at such times the upper limiting frequency will be higher than at times of low solar activity, though the lower limit is also raised slightly. At night the upper limit will be high and the band for good propagation particularly broad, since the lower limit will disappear.

During the next few years the ionisation of the layers will fall, and, therefore, general short-wave conditions will become less good, particularly on the higher frequencies. The frequencies used both for day and night will be lower and the band of frequencies on which reception can be obtained will be narrower than at present.

But, in connection with high solar activity, there often occur violent eruptions on the sun, whose effect on shortwave communication is the reverse of beneficial. For, from a sunspot which is in an eruptive state are emitted radiations of at least two types, each producing a different effect. Radiations of the two types may be emitted from the same eruption, either simultaneously, or at different times.

One type is an abnormal burst of ultra-violet radiation, which is Incapable of being absorbed at the F layer and so reaches the E and lower layers. Here it raises the ionisation to such an extent that the attenuation for short waves is so increased that they are completely absorbed. This produces the “short period” fade out, so called because its duration seldom exceeds an hour, owing to the high rate of recombination in these layers because of their high gas pressure. The fade out only occurs during daylight and, as it is a phenomenon of attenuation, the lower frequencies are most affected.

The other type of radiation emitted is that which causes the “ionosphere storm” – as well as the Polar Aurorae and “magnetic storm” – and it is thought to be of a corpuscular nature. These corpuscles are ejected from the eruptive area, and, travelling with great velocity, bombard the outer ionosphere, particularly near the earth’s Poles, whence they are swept by the earth’s magnetic field. The result of this is that the ionisation of the F layer is reduced, so that the higher frequencies penetrate it and so are lost in outer space. Thus the higher frequencies suffer most severely. The stream of charged bodies converging on the Poles produces fluctuations in the earth’s magnetic field – the magnetic storm – and on reaching the lower atmosphere splits up the atoms of oxygen, so giving rise to the red and green light of the Aurorae.

Thus we see that while short-wave conditions will become less good on the higher frequencies, still, on the lower frequency bands, they are likely to be more stable and less liable to sudden disturbances. For with the approach of the minimum period of solar activity less and less of these eruptive areas are likely to occur on the sun, with the result that more dependable conditions should prevail. 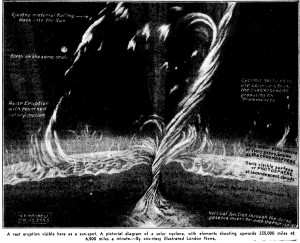