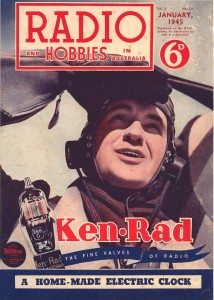 We feel sure DX’ers would not have appreciated the sealed set scheme, used for a time during 1924. To overcome the financial problem, a listener was able to purchase a set, enabling him to receive signals from one station only. The listener was able to choose the station to which he wished to listen, and was compelled to pay a licence fee to the station to which his receiver was tuned. Stations asked their own fees, by the way.

Broadcasting, as we know it today, began when the Westinghouse Electric Co.’s station, KDKA, in Pittsburg, USA, broadcast election returns on November 2, 1920. Other experimental transmissions had, no doubt, been carried out before this date. The first regular broadcasts in England began only one year before Sydney came on the air. Station 2LO London began on November 14, 1922. Back in our own country, we found stations popping up like mushrooms everywhere. 3AR Melbourne, Associated Radio Services, began on January 26, 1924. 6WF Westralian Farmers, June 4, 1924. &c., &c. Radio 2UE Sydney is our oldest existing commercial station, having been in operation since 1925. A complete list of Australian stations now in operation, appears elsewhere In this issue.

This entry was posted in History, Receivers. Bookmark the permalink.