Posted on February 10, 2015 by Paul Ormandy | Comments Off on Tribute To Frank Glen 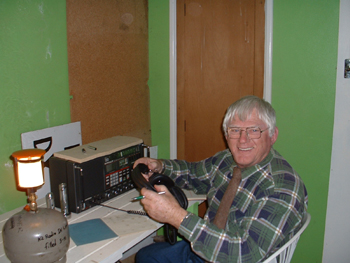 Frank at Tiwai, his “magic place”

REMEMBERING FRANK GLEN Our highly respected Patron and Life Member passed away on 5 February, a couple of months after being diagnosed with a brain tumour. This issue of the DX Times has been dedicated to Frank and you will find tributes and reminiscences of members elsewhere. But, for those who did not have the privilege of meeting Frank, some details of his varied life and interests: In his 82 years, the Reverend Doctor Frank Grenfell Glen had an impact in many places. From the DX perspective, he joined the Southland Branch of the NZ Radio DX League aged 16 in 1949, just a year after the League’s formation. The Branch expelled him in 1953 for not paying his subscription, but 6 months later reinstated him. He was an electrical apprentice at the time earning just 30/- ($3) a week. At the instigation of foundation member MERV BRANKS, Frank rejoined the League in 1976 upon returning to Invercargill. He remained a member until 1983 when he shifted to Hastings, and rejoined a third time in 1987 when based in Thames, Frank had been a member ever since, interested in both shortwave and medium wave DX. From his youth Frank was also interested in aviation and, thanks to a scholarship he learnt to fly as an RNZAF cadet in the early 1950s. In 1955 he began training for the Methodist ministry and married Margret in 1958. Their interesting life together has been captured in a series of books that Frank wrote – “Holy Joe’s People” (published by Reed in 1968) covered Frank’s first parish in Western Southland and included his pioneering work as an Industrial Chaplain on the giant Manapouri Hydro Scheme. “Fly High, Reach Far” (Reed 1971) chronicled the period from 1966 when the couple worked for the Methodist Church’s Far West Inland Mission, covering an area of 92,000 square miles of NSW, Queensland and South Australia. Frank’s skills as a pilot and clergyman enabled a more effective church mission to inland Australia. In 1976 the Glens returned to Southland – ‘Bush in our Yard’ (Reed 1990) covers their life on a 2 hectare property at Myross Bush and Frank’s time as a Probation Officer. During his training for the ministry at Trinity College Auckland, Frank became interested in church history and later historical research of military matters became a major focus. Frank had been appointed National Service Chaplain with the NZ Army in 1962, and following his Australian outback flying days he spent 6 years as a chaplain with the RAAF. He was admitted as a Fellow of the Australian Institute of History and the Arts in 1990 and was the editor of the NZ Journal of Military History for 5 years. He is an Honorary Life Member of the NZ Military History Society. In 1998 Frank graduated PhD from the University of Waikato and his thesis dealt with the Chaplains of the NZ Expeditionary Force 1939-45. In the past decade Frank has had several more books published – “Bowler of Gallipoli” (Australian Military History Publications 2004) – the basis of a TV documentary currently in production, and “Australians at War in NZ” (Willson Scott Publishing, 2011), dealing with the 2400 Australians who fought in our Maori Land Wars between 1860 and 1867. Frank was elected League Patron in 2008 following the death of JACK FOX and in that role he has been a wise and encouraging presence for the Administration Committee. He was also a lively presence at many League conventions. We are grateful for the role that Frank and Margret have played in our club and our lives. In Frank’s honour, the League has made a donation to the George Barton Trust at Knox College Dunedin, where Frank’s extensive Archives including DX material is being housed.